The Newark Experience: The Arts

The Institute of Jazz Studies

The Institute of Jazz Studies, located on the 4th floor of the Dana Library, is the largest and most comprehensive library and archive of jazz and jazz-related materials in the world. The collection includes material relating to the history of jazz in Newark. Newark Jazz Materials [From the Newark Archives Project] 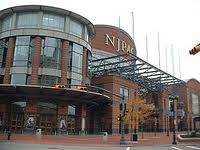 Built in 1925, Newark's Symphony Hall is "New Jersey’s oldest and largest showcase for the arts, education and entertainment programming."

Symphony Hall Memories Project. Compilation of personal experiences that current and former Newarkers and New Jerseyans have had at Newark Symphony Hall.

The State of the Arts in Newark.
Jack Tamburri. September 2001.

Records of the Carteret Book Club of Newark, New Jersey
Description and finding aid to the collection at the Grolier Club Library in New York City.

Swing City : Newark Nightlife, 1925-50.
Barbara J. Kukla. Philadelphia : Temple University Press, 1991.
Discusses Newark as a center for African American music and entertainment in the the first half of the 20th century. Based on interviews with musicians, singers, dancers, comedians, bartenders, waitresses and nightclub owners and their families. Available? 2002 Available?

My Fifty-Two Years in the Music Business in Newark, N.J., 1902-1954
Henry F. Mutschler. Illustrated manuscript in the Cummings New Jersey Information Center collection at the Newark Public Library.
"This typescript history...is filled with detailed accounts of the music teachers of Newark and surrounding towns, of music festivals, music clubs and societies, virtuoso performances, music promoters like Joseph Fuerstman, music in the schools, Works Progress Administration (WPA) music programs, theaters and vaudeville houses, and of the craze for movie theaters...." More... [From the Newark Archives Project]

"New Jersey After Hours"
Cover of After Hours: The Weekly Guide to Entertainment [March 3, 1950]

[The Early Years of Savoy Records]. [Videorecording] 1998
The early history of Newark-based Savoy Records, one of the most important record labels in the history of jazz and gospel. Available?

"As Baltimore Goes, So Goes the Nation,"
Dan Kochakian. Blues & Rhythm, the Gospel Truth 207, March 2006, pp.8-10.
"Offers a look on the life of songwriter and producer Robert Banks in Newark, New Jersey." Available?

"Club Music as a form is rooted in disco, but it came into its own in the '80s as underground black dance music after disco's commercial peak...club was by far the most popular art form in Newark during the 1980s."

A Journey Through the House: Photo Memoirs of Club Zanzibar
Vincent Bryant. Createspace, 2014.
Newark's legendary dance club of the 1970s and 80s. Available?

Sanctuary: A History of Queer Club Spaces in Newark
"Sanctuary is a collaboration between the Queer Newark Oral History Project of Rutgers University-Newark, Yendor Productions, and the LGBT community of Newark to explore, document, and exhibit the city’s club scene."

Live, From Newark: The National Hip Hop Political Convention
Niamo Mu'id. Socialism and Democracy 18 (2), July 2004, pp. 221-229.
The the first National Hip Hop Political Convention was held in Newark from Wednesday June 16 through Saturday June 19, 2004. The meeting included delegates from 20 states that put forth a five point national agenda that listed the issues and political demands of the Hip Hop Generation. Rutgers-restricted Access

Outside Broadway: A History of the Professional Theater in Newark, New Jersey, From the Beginning to 1867.
Lester L. Moore. Metuchen, N.J., Scarecrow Press, 1970. Available?

Cinematreasures.org has brief histories and photos of the following Newark theaters:

Musicians Guild of Essex County Records, 1901-ca. 1983.
"Office files of the Musicians Guild of Essex County...Membership included musicians playing with bands and groups, individual performers, members of classical orchestras, and others. Several boxes consist of routine material such as copies of recording contracts, insurance policies, utility bills, mailings from the national union (based in New York City), benefit fund records, ledgers, etc. Other portions of the collection are rich in details of union history (including intra-union conflicts) and the lives and careers of individual musicians." More from the Newark Archives Projects