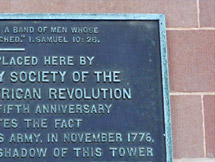 National Republicans of Essex County!...The great contest is at hand!
Newark Sentinel November 6, 1832
Advertisement urging the election of Henry Clay in the presidential election. Reprinted in facsimile in the Jersey City Observer January 9, 1936.