The Newark Experience: Other Newark Artists 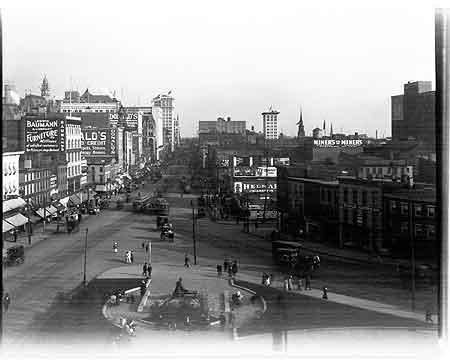 William F. Cone (1874-1966), Commercial Photographer
Finding aid to the collection at the New Jersey Historical Society. "This collection documents commerce, architecture, transportation and industry in Newark, New Jersey and the surrounding area during the early 20th century. It consists of over 9000 glass plate negatives (8x10, 11x14, 5x7 & 4x5); film based negatives, and slides. In addition there are several ledgers relating to Cone's business."

Henry Gasser: Beyond City Limits
Essay on the Newark artist (1909-1981) by Gary T. Erbe and images of many of the works from an exhibit created by the Butler Institute of American Art and shown at the Morris Museum in Morristown and at the Walsh Library Gallery at Seton Hall University [April 1 through June 28, 2004].

"Henry Gasser's Paintings of Newark,"
American Artist 30 (9), November 1966, 48-53; 75-77.
The six paintings commissioned by Prudential commemorating Newark's 300th anniversary plus earlier paintings exhibited for the occassion. Includes a commentary by the artist on the technique used for the paintings as well as some anecdotes from "painting on the street." Available?

To Commemorate the 300th Anniversary of the City of Newark the Prudential Insurance Company of America Presents an Exhibition of Watercolors by Henry Gasser.
Newark, N.J., Prudential, 1966. Available?

John R. Grabach: Seventy Years an Artist.
Virginia M. Mecklenburg. Washington, D.C., Smithsonian Institution Press, 1980.
While he lived much of his life in Irvington, Grabach was born (1886) and raised in Newark and taught at the Newark School of Fine and Industrial Arts. Available?

An Artist Looks at Newark.
Adolf Konrad. An exhibition in connection with the 300th anniversary of the city of Newark, the Newark Museum, April 16-September 5, 1966. Newark, N.J. : Newark Museum, 1966. Available?

The Realist Vision of Adolf Konrad: A Retrospective.
Barbara Mitnick. Morristown, N.J., Morris Museum, 1992.
Catalog of exhibition held at the Morristown Museum March 29-May 24, 1992 of the work of the 'painter-laureate of Newark.' Available?

"Rembrandt Lockwood, an Artist of Newark,"
William H. Gerdts. Proceedings of the New Jersey Historical Society 76(4), October 1958, 265-279.
The career of portrait and religious painter Rembrandt Lockwood who lived and worked in Newark from 1847 to 1858. History and reception of Lockwood's monumental Last Judgement, exhibited in Newark's Concert Hall in 1854. List of Lockwood's known works. Available?