R4R is a resource geared towards those interested in the use of bibliotherapy, i. e., guided reading, for substance use problems. It was created at the Rutgers Center of Alcohol Studies Library in 2015-2016 with the help of an ALA Carnegie-Whitney grant.

To illustrate the process how this guide was created, here are eight posters presented at the 2016 Joint Conference of the Substance Abuse Librarians & Information Specialists and the Association of Mental Health Librarians in Denver, CO.

Our Process: Posters from the R4R Team and Friends 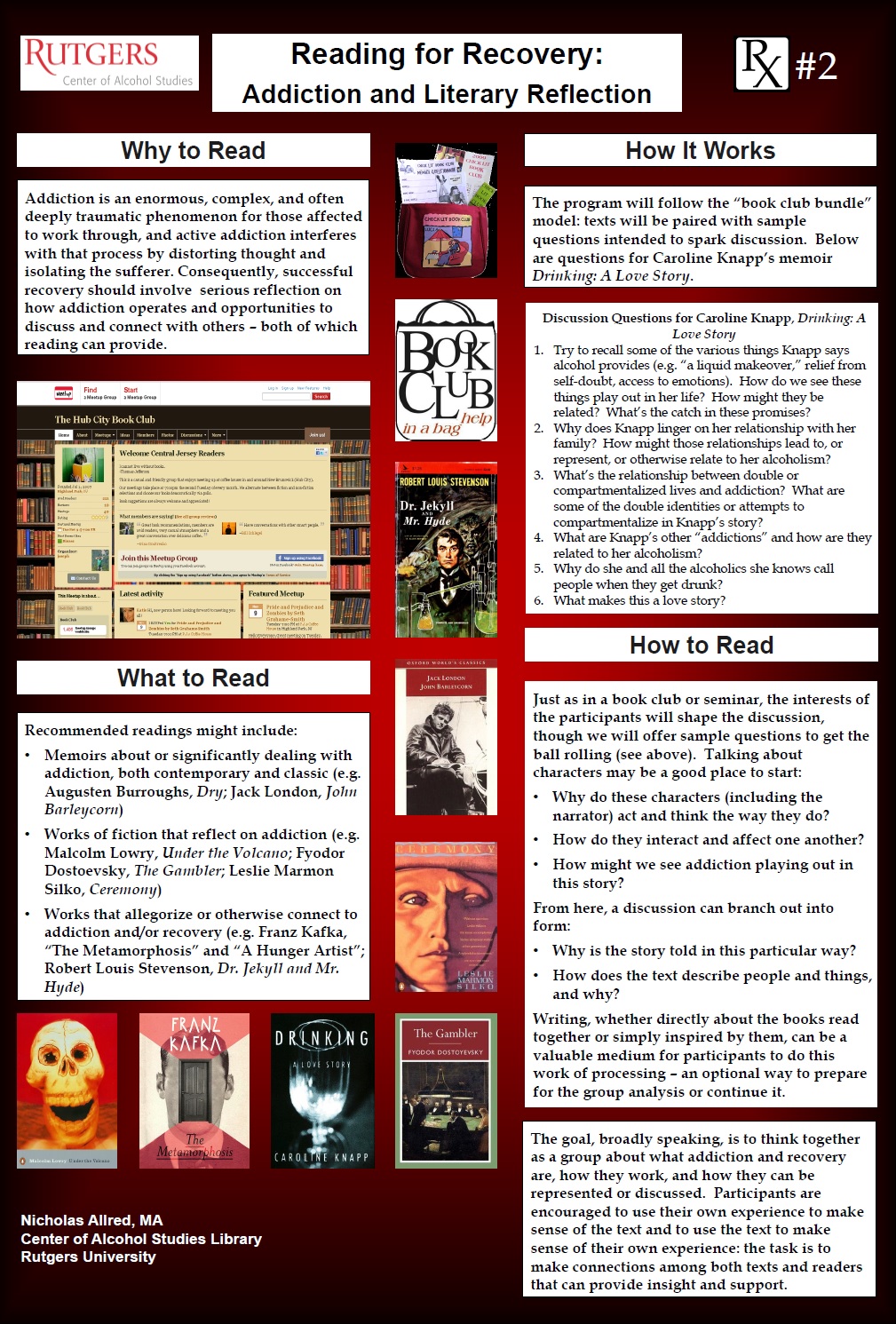 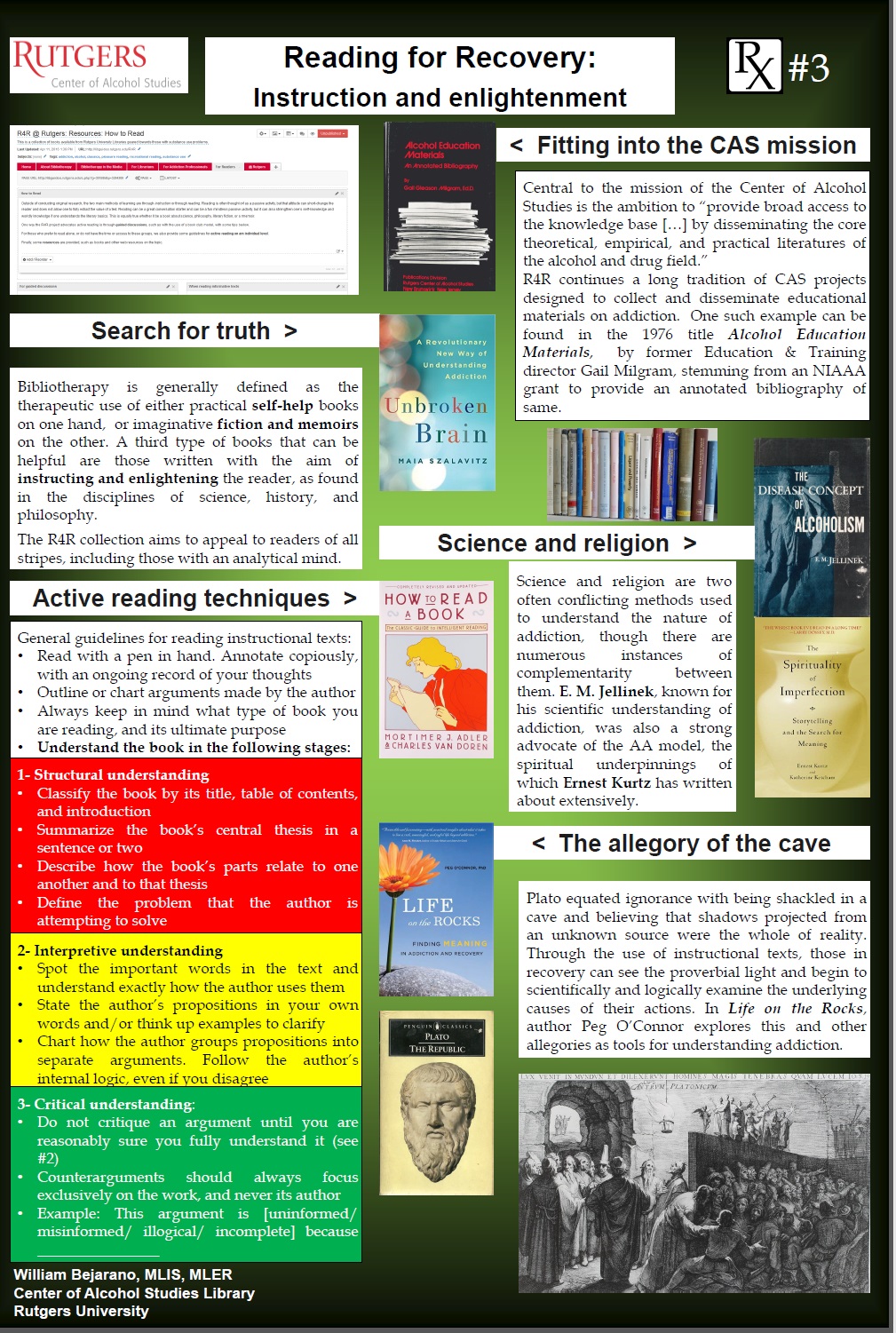 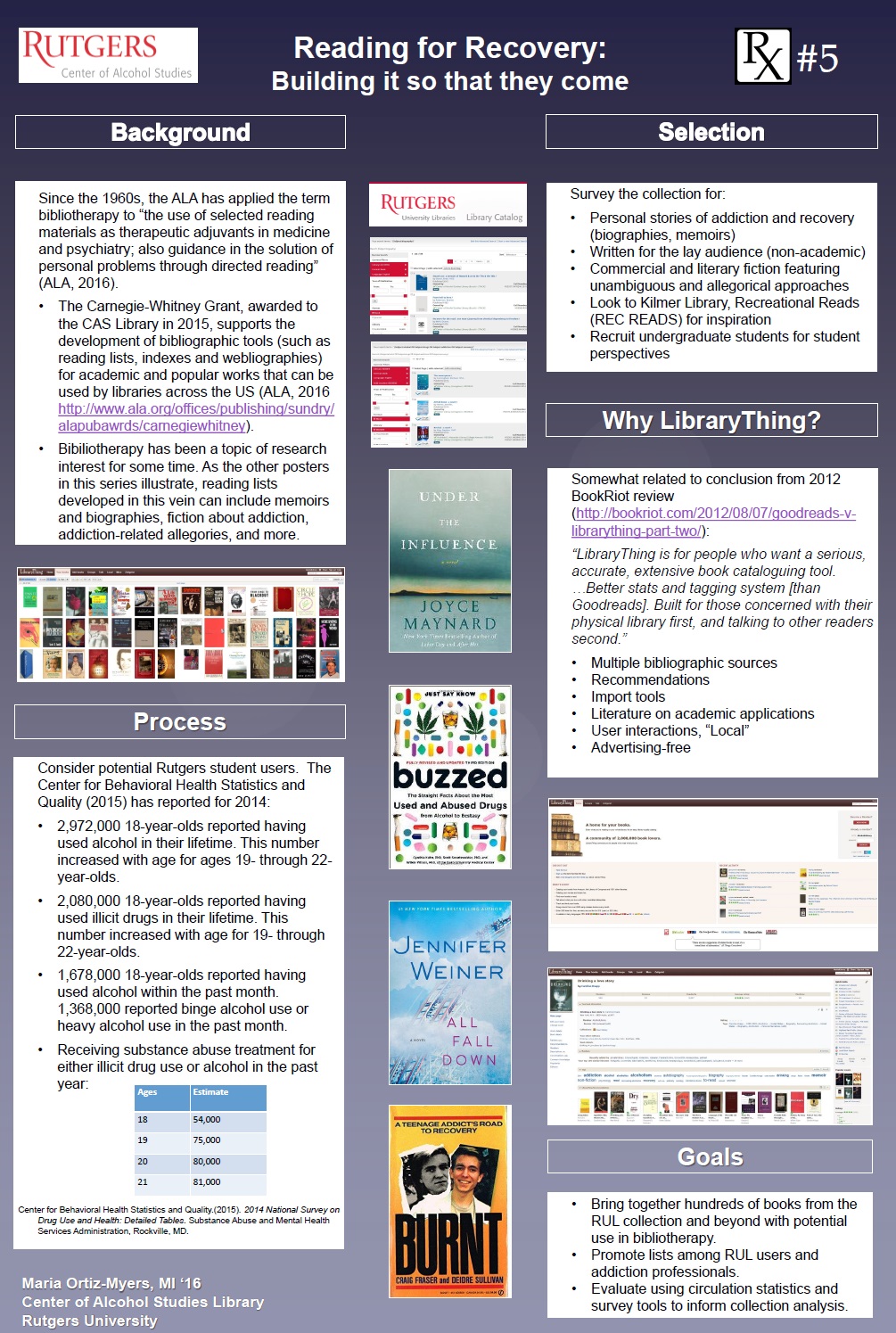 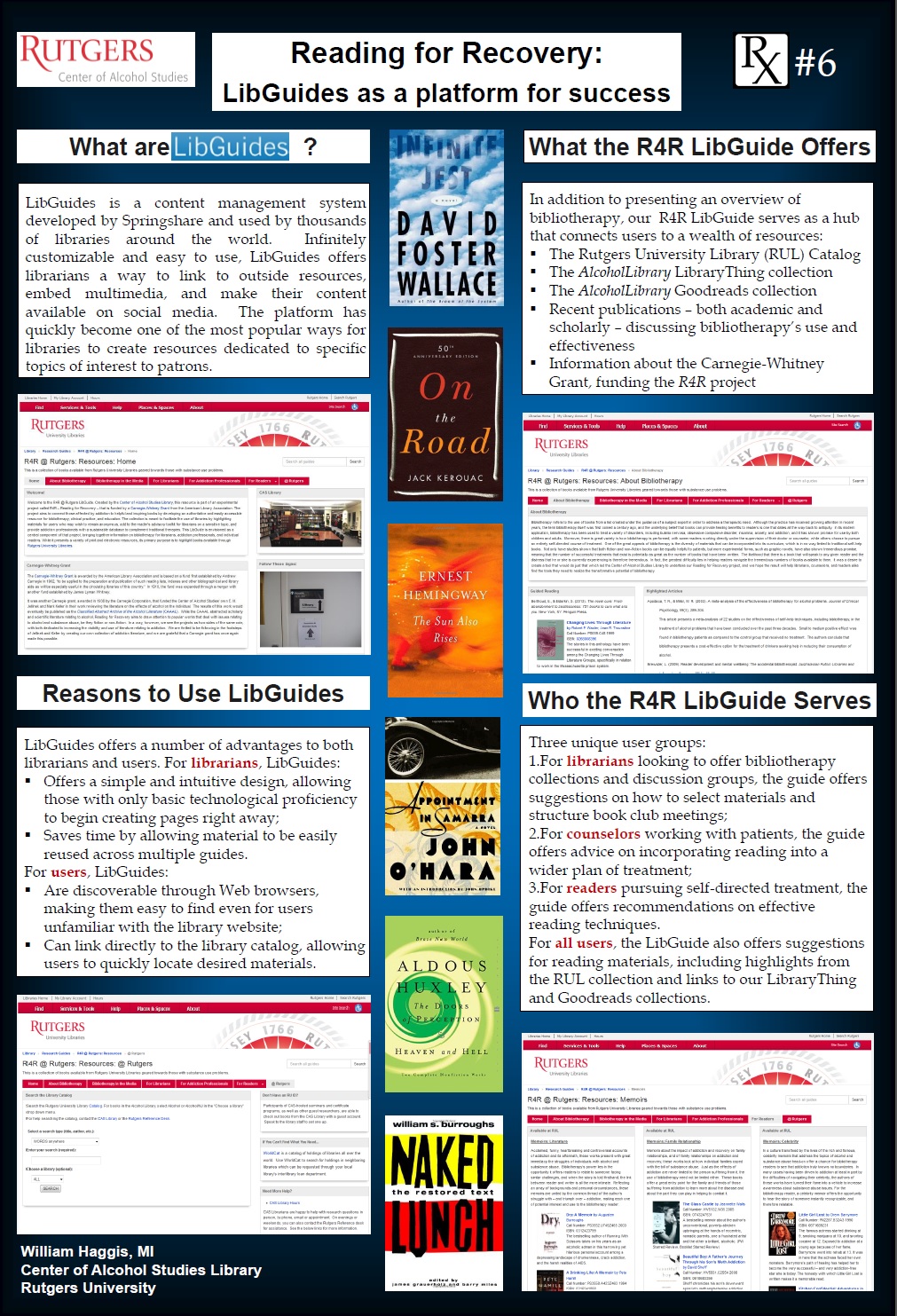 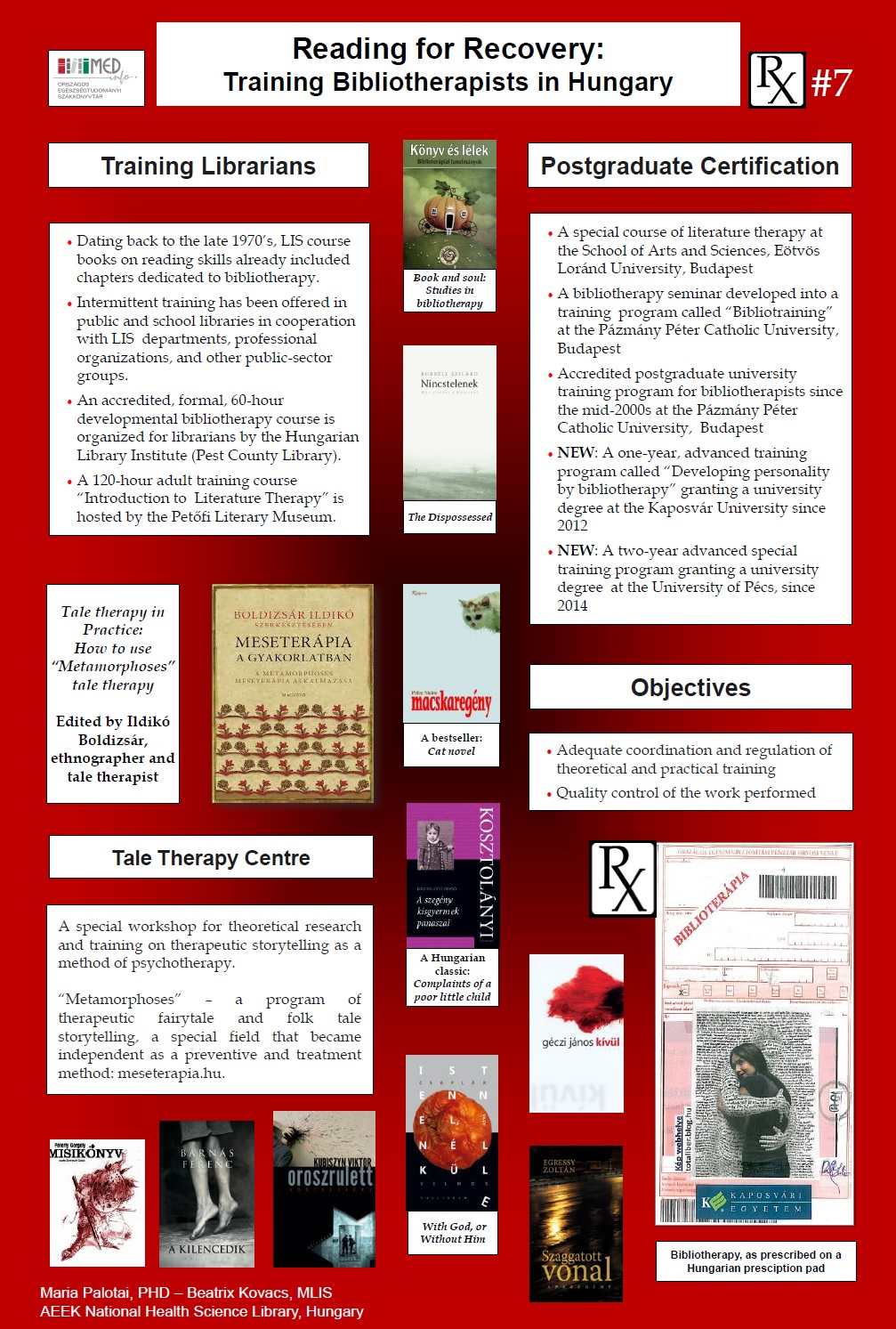 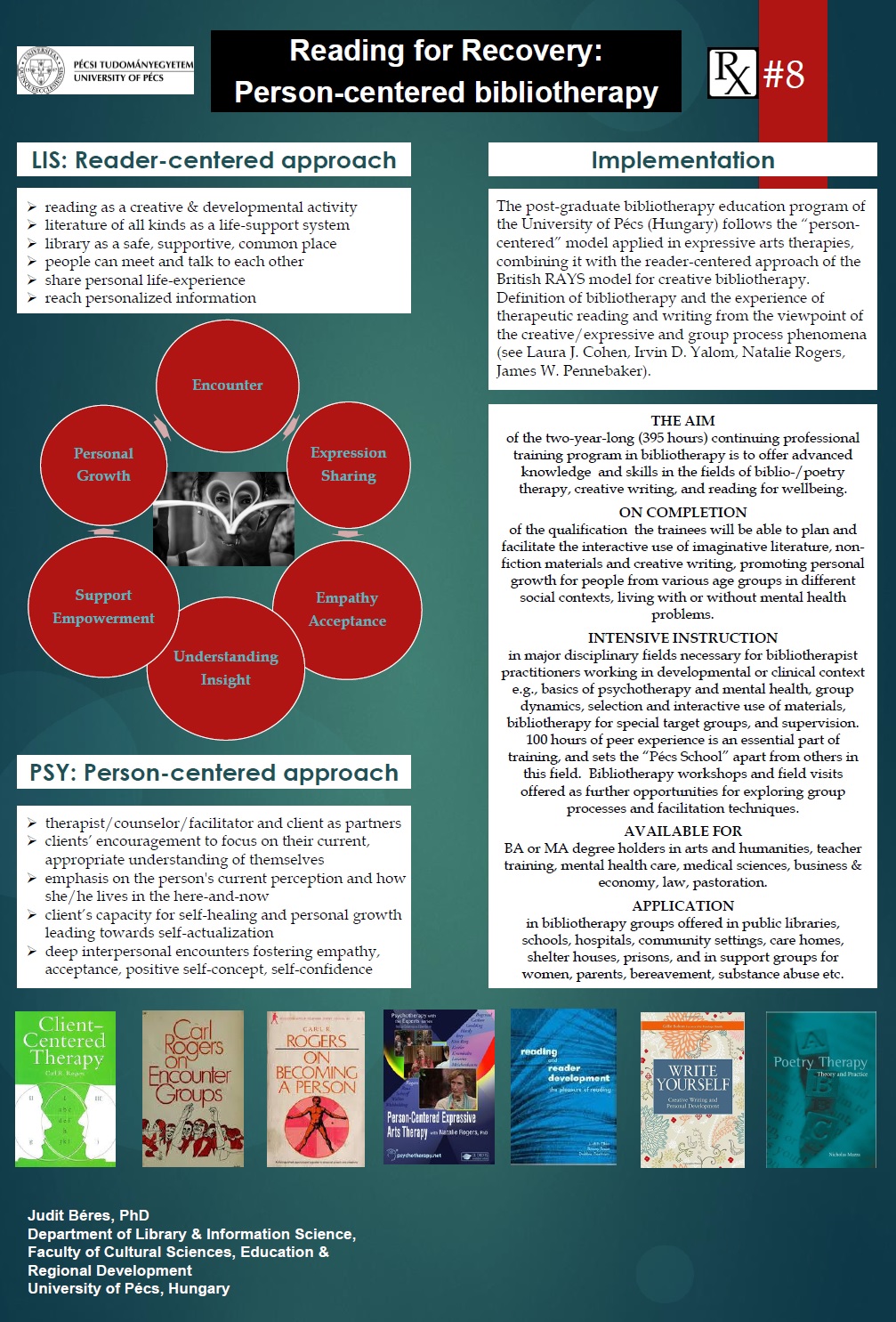 Conclusion (from R4R final report to ALA)

It is fitting that the final project to be undertaken by the Center of Alcohol Studies (CAS) Library has been supported by the ALA Carnegie-Whitney Grant. It was a grant from the Carnegie Corporation in 1938 that funded the original project designed to index and organize the entirety of scientific alcohol literature, known as the Classified Abstract Archive of the Alcohol Literature (CAAAL). This project would serve as a foundation of the institution that would come to be known as the Center of Alcohol Studies. Taking inspiration from CAS founders E. M. Jellinek and Mark Keller, broad thinkers who were instrumental in the design and structure of both the CAAAL project and CAS in general, the Reading for Recovery (R4R) project serves to extend this spirit, spanning also the broader literary, cultural, and philosophical arenas in order to uniquely reach the populations most vulnerable to substance use.

We believe in a certain universality in the written word that can tap into the inherent dignity and humanity of all individuals, transcending geographical, cultural, and generational boundaries. In that spirit, by collecting these works and presenting them in an accessible, user-friendly way, we hope to inspire our target audiences and similarly transcend the institution from which it stemmed, in its final days after more than seventy years of service. Based on the positive feedback we have received from various conferences of addiction and information professionals, we are confident that this tool can do just that. Though the CAS Library will no longer serve the role it has held for this expanse of time, we have worked diligently to leave a legacy of positive societal impact, always keeping in mind the long-term and “big picture” goals of the original CAS founders.