This guide is designed to help you find resources to complete your papers for Professors Crowley and Hetling, Fall 2022

Act - a law or several laws that has been enacted and are being enforced. Same as a statute (see below)

Committee Reports - analyses and recommendations regarding legislation. When the House and Senate cannot reconcile their different versions of a bill, a committee with members from both houses works out a compromise and issues a conference committee report.

Hearing - "A hearing is a meeting or session of a Senate, House, joint, or special committee of Congress, usually open to the public, to obtain information and opinions on proposed legislation, conduct an investigation, or evaluate/oversee the activities of a government department or the implementation of a Federal law. In addition, hearings may also be purely exploratory in nature, providing testimony and data about topics of current interest." (Government Printing Office)

Legislative History - traces the development of a law from its original consideration to enactment of the statute. It cites a collection of documents that provide the background and actions that lead to the public law.   These include bills, hearings, reports, debates, and presidential signing statements.

Ordinances - laws created by local legislatures, like a township, city, or village government.

Regulations - "A rule, adopted under authority granted by a statute, issued by a municipal, county, state, or federal agency. Although not laws, they have the force of law and often include penalties for violations. Regulations are not generally published in the books that contain state statutes or federal laws, but often must be obtained from the agency. To adopt a regulation, an agency usually drafts the rule, publishes it in governmental journals intended to give public notice, holds hearings, and then adopts a final, revised regulation.The process is best known to industries and groups concerned with the subject matter. Federal regulations are adopted under the procedure set out in the federal Administrative Procedure Act (APA); states usually follow similar procedure." (Nolo's Free Dictionary Of Law Terms and Legal Definitions)

Signing Statements - released by the president upon signing a law

Slip Law - the first printing of a law after it is signed, contains a single sheets or pamphlets with the text of the law. These are labeled PL (public law)

Statute - often used interchangeably with Law, but is actually the same as an Act (see above)

The US Code - The final printing of a law (after its printing as slip law and in the Statutes at Large). The US Code is organized by subject.

The Timeline of Printing a Federal Law 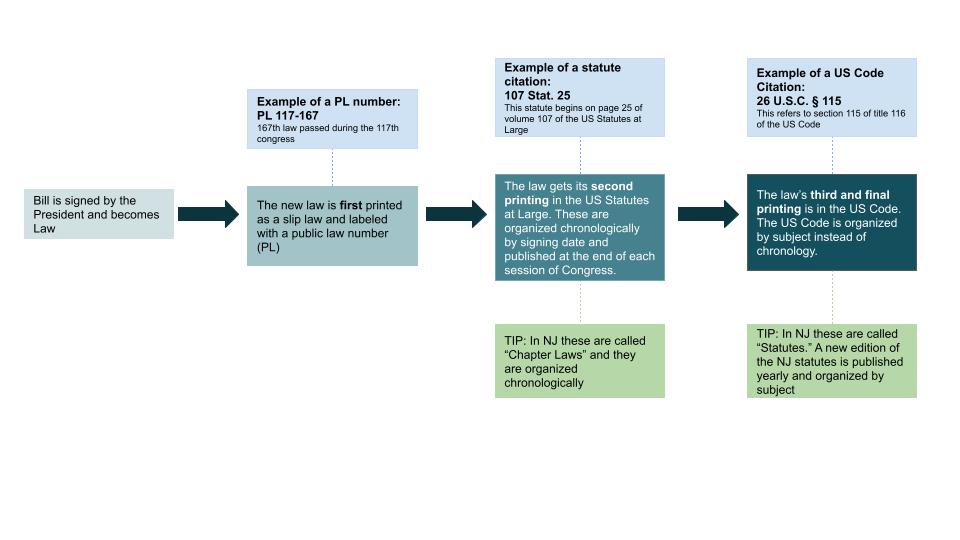 Each state has a slightly different way of conducting legislative business. You can read about New Jerseys here.

Sometimes you aren't sure what law, bill, or topic you'd like to write about or research. These sources are helpful in narrowing down your topic and choosing legislation.