This guide will introduce you to the Systematic Review process.

How to Critically Appraise a Systematic Review 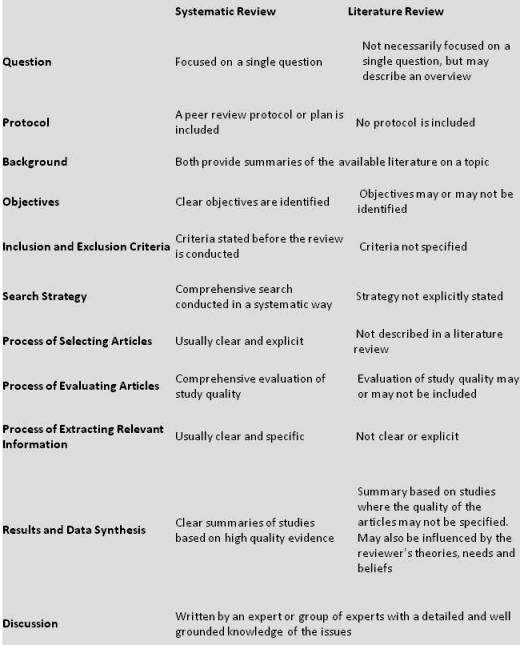 A literature review is something most of you have done this at one time or another. As a publication type it is an article or book published after examination of previously published material on a subject. It may be comprehensive to various degrees and the time range of material scrutinized may be broad or narrow, but the reviews most often desired are reviews of the current literature. The textual material examined may be equally broad and can encompass, in medicine specifically, clinical material as well as experimental research or case reports.

State-of-the-art reviews tend to address more current matters. A review of the literature must be differentiated from HISTORICAL ARTICLE on the same subject, but a review of historical literature is also within the scope of this publication type. The literature review examines published materials which provide an examination of recent or current literature. Review articles can cover a wide range of subject matter at various levels of completeness and comprehensiveness based on analyses of literature that may include research findings. The review may reflect the state of the art. It also includes reviews as a literary form.

A meta-analysis goes beyond critique and integration and conducts secondary statistical analyses on the outcomes of similar studies.  It is a systematic review that uses quantitative methods to synthesize and summarize the results.

An advantage of a meta-analysis is the ability to be completely objective in evaluating research findings.  Not all topics, however, have sufficient research evidence to allow a meta-analysis to be conducted.  In that case, an integrative review is an appropriate strategy.

A meta-analysis may be part of a systematic review.

First of all, what is a meta-synthesis?

Meta-synthesis Vs. Meta-analysis: Whats the difference?

Unlike a meta-analysis which is used to aggregate findings to establish ‘truths’, for example, if an intervention has a true effect on a variable, a meta-synthesis can lead to new interpretations of research. This can result in new theories being developed.

1) Theory Building – This form of meta-synthesis brings together findings on a theoretical level to build a tentative theory.

2) Theory Explication – This form of meta-synthesis is a way of reconceptualising the original phenomenon.

3) Descriptive – This form of meta-synthesis provides a broad description of the research phenomenon.

These forms of meta-synthesis are not discrete, they are complimentary. The aim of Meta-synthesis usually overlap as you will see in the example later on.

Why use a meta-synthesis?

Qualitative data is useful for providing a snapshot at one person’s interpretation of an event or phenomenon. By bringing together many different interpretations you are strengthening the evidence for an interpretation by discovering common themes and differences & building new interpretations of the topic of interest.

At its most basic, narrative reviews are most useful for obtaining a broad perspective on a topic and are often more comparable to a textbook chapter including sections on the physiology and/or epidemiology of a topic.

When reading and evaluating a narrative review, keep in mind that author's bias may or may not be present.  The labels Narrative Review and Literature Review are often describing the same type of review.

For scientific purposes, the term Literature Review is the one used most often.