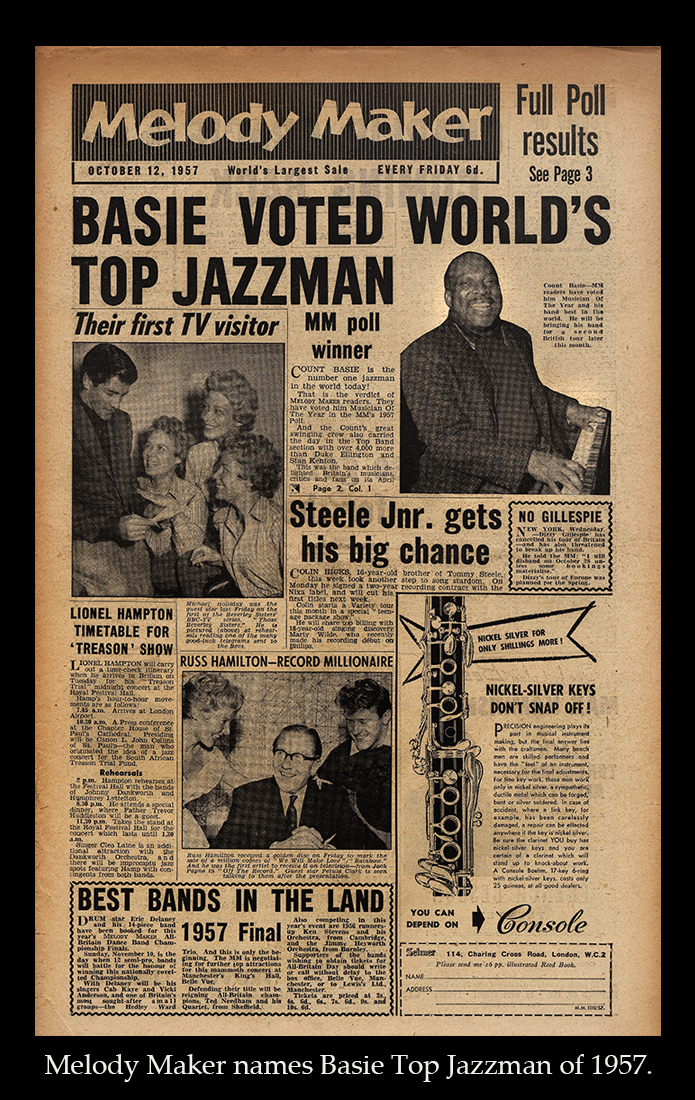 The Birdland All-Stars at Carnegie Hall
Roulette, 1954; Roulette RE-127 (LP); Roulette 986 (CD)
Basie and the band were part of a September 25, 1954 line-up that included Billie Holiday (voc), Sarah Vaughan (voc), Charlie Parker (as), Lester Young (ts), Stan Getz (ts) and the Modern Jazz Quartet. In addition to numbers featuring the band, it accompanied Holiday and Vaughan. The Basie set features some of its star soloists of the time, including the two Franks: Wess (ts) and Foster (ts).

The Sound of Jazz
CBS Seven Lively Arts, December 8, 1957
This iconic broadcast remains one of the great documents of jazz history, in part because of the casual atmosphere in which the music poured forth in the studio. Count Basie joined Billie Holiday (voc), Jimmy Rushing (voc), Lester Young (ts), Coleman Hawkins (ts), Ben Webster (ts), Gerry Mulligan (bs), Rex Stewart, Milt Hinton, Thelonious Monk, Doc Cheatham, Roy Eldridge, Pee Wee Russell and many more. Rehearsal recordings from December 5 were released on Columbia 8040 (LP), and Columbia 45234 and Columbia 66082 (CDs); The Real Sound of Jazz presenting audio from the actual broadcast can be found on Pumpkin Records LP #116. The broadcast was released on DVD in 2003 by Quantum Leap.

The Complete Roulette Studio Recordings of Count Basie and His Orchestra, 1957-1962
Mosaic, 10 CDs, MD 10-149
Original sessions by Teddy Reig
The 23 albums contained in this set reflected producer Teddy Reig’s enthusiasm for the Basie band as well as the business interests of Roulette Records owner, the mobbed- up Morris Levy, who regularly booked Basie in his popular New York nightclub, Birdland. This set contains some of the most important recordings of Basie’s later career.

The Complete Roulette Live Recordings of Count Basie and His Orchestra, 1959-1962
Mosaic, 8 CDs, MR8-135, 1991
Produced by Teddy Reig
Recordings include those from Miami convention of record producers and broadcasters, May 1959; several sets at Birdland, June 1961; and concerts in Stockholm, August 1962

Sing a Song of Basie
Lambert, Hendricks and Ross
Original session produced by Creed Taylor for ABC-Paramount Records, 1957
ABC 223 and Impulse 83 (LPs); Verve 543827 and Impulse 112 (CDs)
In a style known as "vocalese," where invented lyrics are sung note for note of soloists' improvisations, this hit album launched Dave Lambert, Jon Hendricks and Annie Ross into the stratosphere as one of the premiere vocal groups to emerge in the 1950s.

Count Basie and His Atomic Band: Complete Live at the Crescendo, 1958
Produced by Gene Norman, June 24-July 2, 1958, Los Angeles
Phono 87045 (5 CDs)
This set of recordings, released by Phono of Japan, has great music and sound, as well as a fetching menu of what the band was playing at the time. Joe Williams is at his peak with the band; also featured is a guest appearance by Sammy Davis Jr. singing “Hallelujah, I Just Lover Her So.” 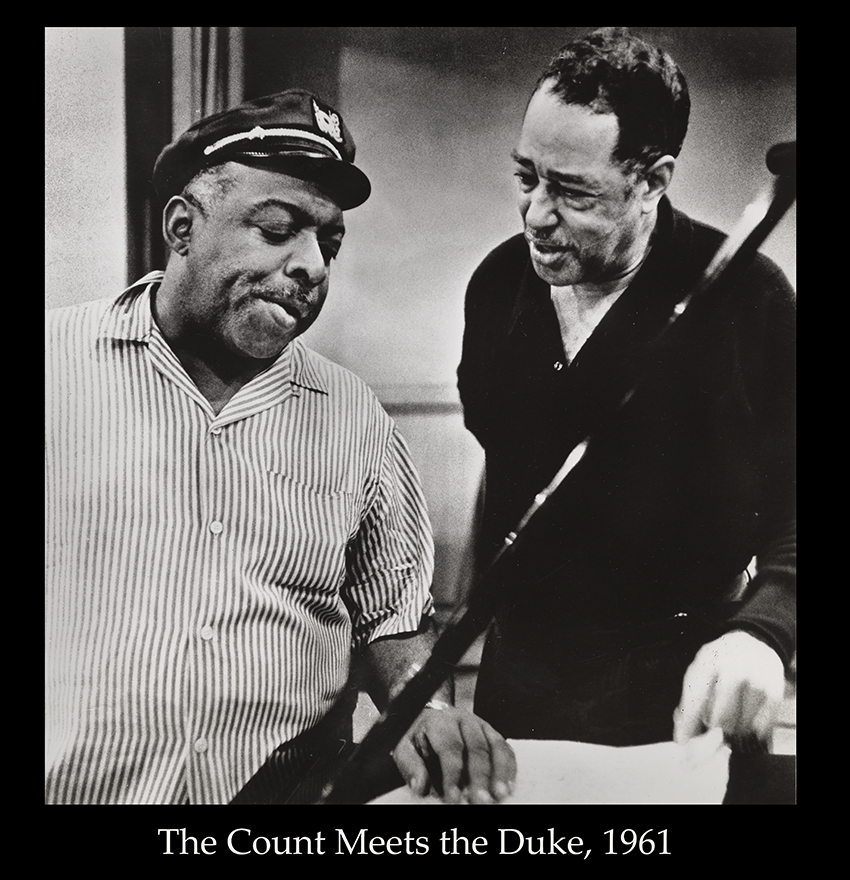 First Time! The Count Meets the Duke
Produced by Teo Macero, 1961
Columbia 8515, 1715, 40586 (LPs); Columbia 40586, 65571 (CDs)
In 1980, on pianist Oscar Peterson’s show on BBC Four, he and Basie performed duets and reminisced. Peterson said, “One question that has been burning in my mind, . . . given that Duke Ellington’s and your orchestra are the two most famous, what are the differences between the two?” Basie brought down the house down when he said, “Class.” This July 1961 summit proves the respect was mutual.

Count Basie/Sarah Vaughan
Produced by Teddy Reig, 1961
Roulette 52061 (LP); Roulette 94983 (CD)
Kirk Stuart, Vaughan’s pianist at the time of this recording, replaces Basie on this album of standards with the Basie band

Sinatra-Basie: An Historic Musical First
With Frank Sinatra, 1962
Arrangements by Neal Hefti
Reprise R9-1008 (LP); Reprise 927023, 947241 (CDs)
This album marks the first of three albums of Sinatra and Basie on Sinatra’s Reprise and should put to rest any question about whether he could credibly sing jazz. It didn’t hurt that the band was playing from new and exciting Neal Hefti arrangements.

This Time by Basie! Hits of the 50's And 60's
Produced by Teddy Reig, 1963
Reprise 6070 (LP)
What might be considered filler material in the Basie catalog was far from it. The record a big seller and received a Grammy in the popular music category.

It Might as Well Be Swing
With Frank Sinatra
Produced by Sonny Burke, 1964
Arranged by Quincy Jones
Reprise 1012 (CD)
The second Sinatra-Basie album introduced “Fly Me to the Moon” and “The Best Is Yet to Come” into the singer’s repertoire as well as covering pop tunes of the day.

Sinatra at the Sands
Produced by Sonny Burke February 1, 1966
Arranged and conducted by Quincy Jones
Reprise 1019 (LP); Reprise 46947 and Reprise 945946 (CDs)
This live date at the Sands Hotel in Las Vegas is the most exciting Basie/Sinatra encounter on record. Listen for Harry Edison’s masterly accompaniment behind Sinatra.

Straight Ahead
Produced by Teddy Reig and Tom Mack, 1968
Dot 25902 (LP)
This album introduces arranger, composer and trombonist Sammy Nestico, another in the line of stellar arrangers who figured into the sound of the Count Basie Orchestra.