This is a Voting 2020 guide for the Rutgers community.

The Nineteenth Amendment to the United States Constitution

"The right of the citizens of the United States to vote shall not be denied or abridged by the United States or by any State on account of sex. Congress shall have power to enforce this article by appropriate legislation." 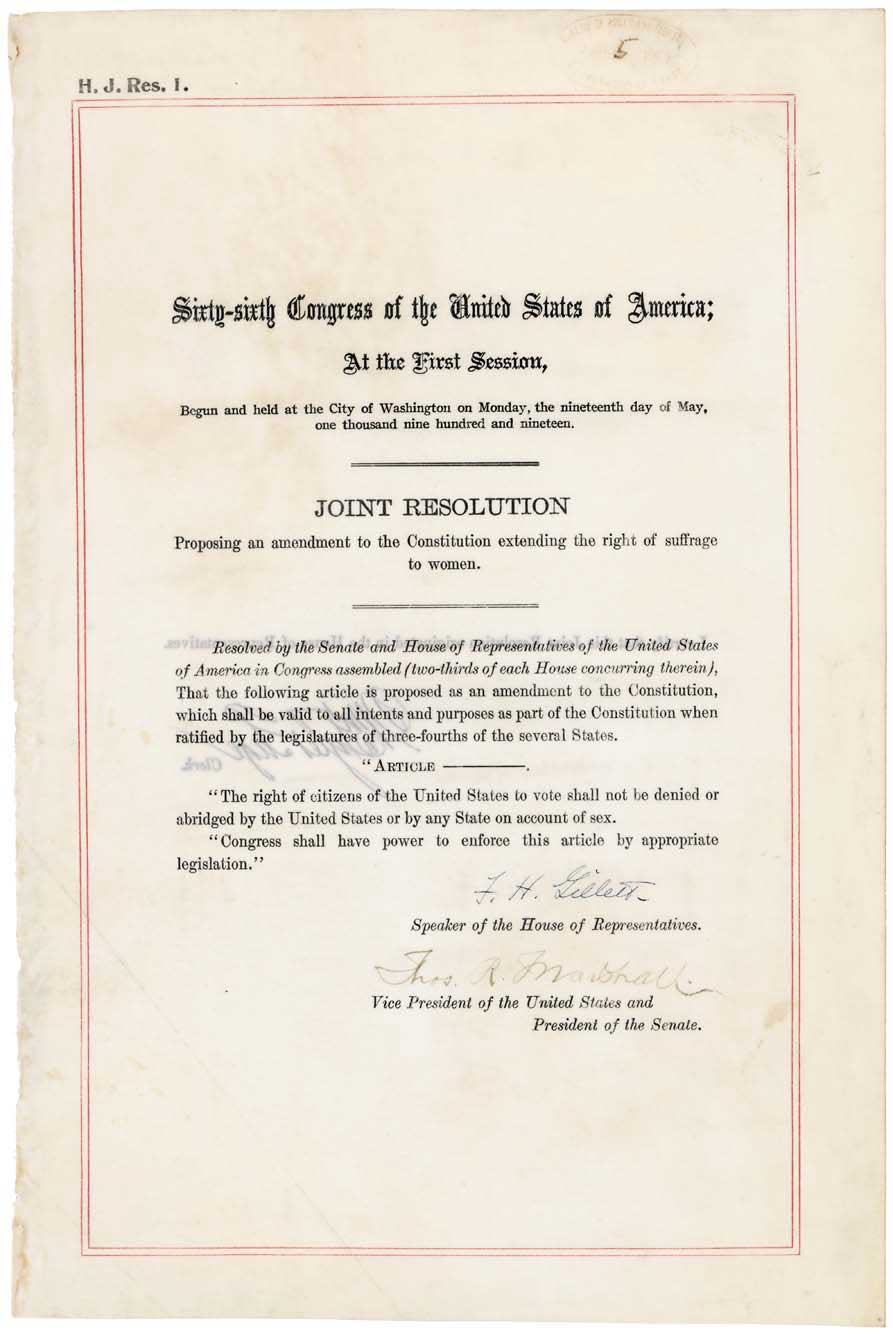 "During the Civil War, Sojourner Truth took up the issue of women's suffrage. She was befriended by Susan B. Anthony and Elizabeth Cady Stanton, but disagreed with them on many issues, most notably Stanton's threat that she would not support the black vote if women were denied it. Although she remained supportive of women's suffrage throughout her life, Truth distanced herself from the increasingly racist language of the women's groups." 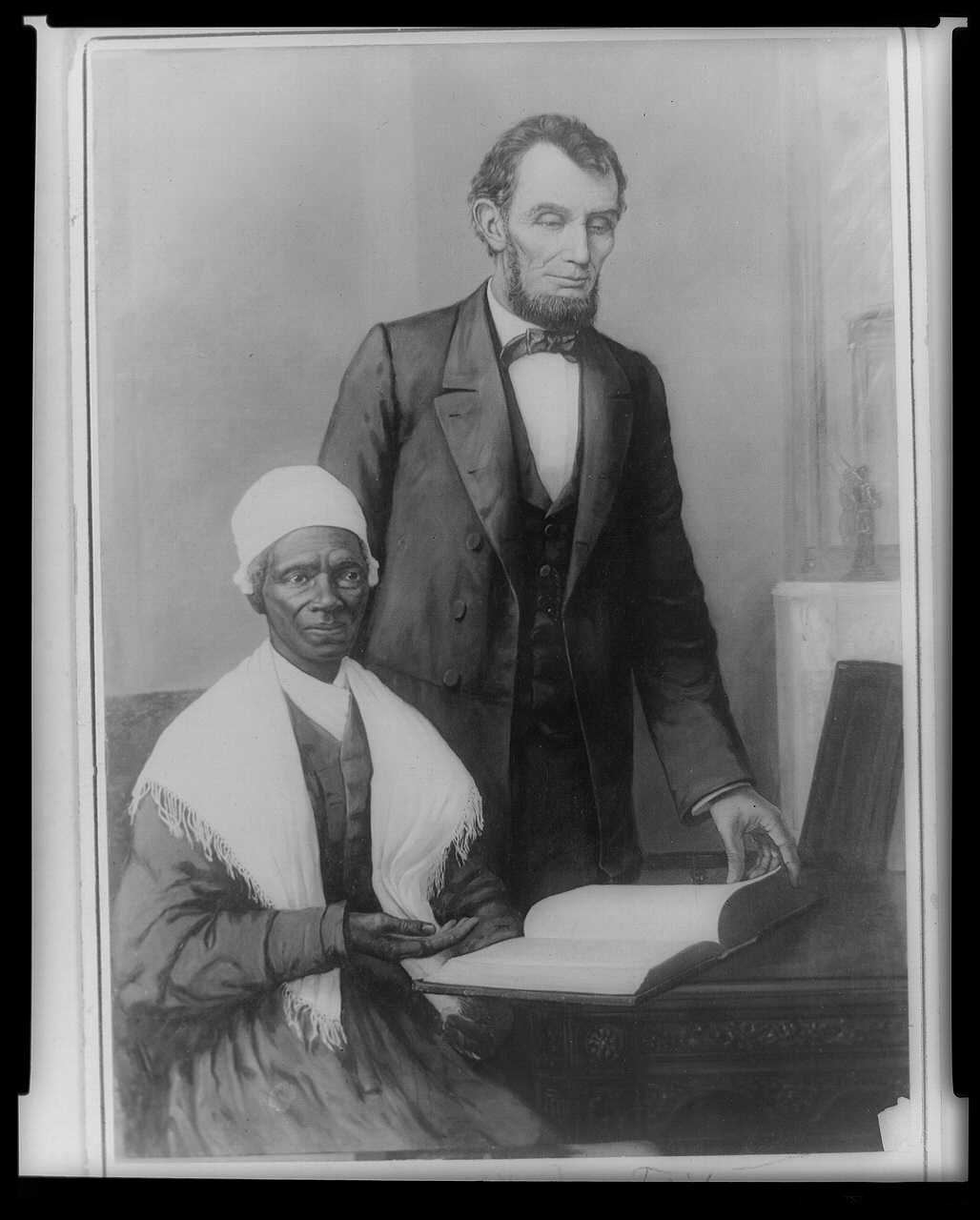 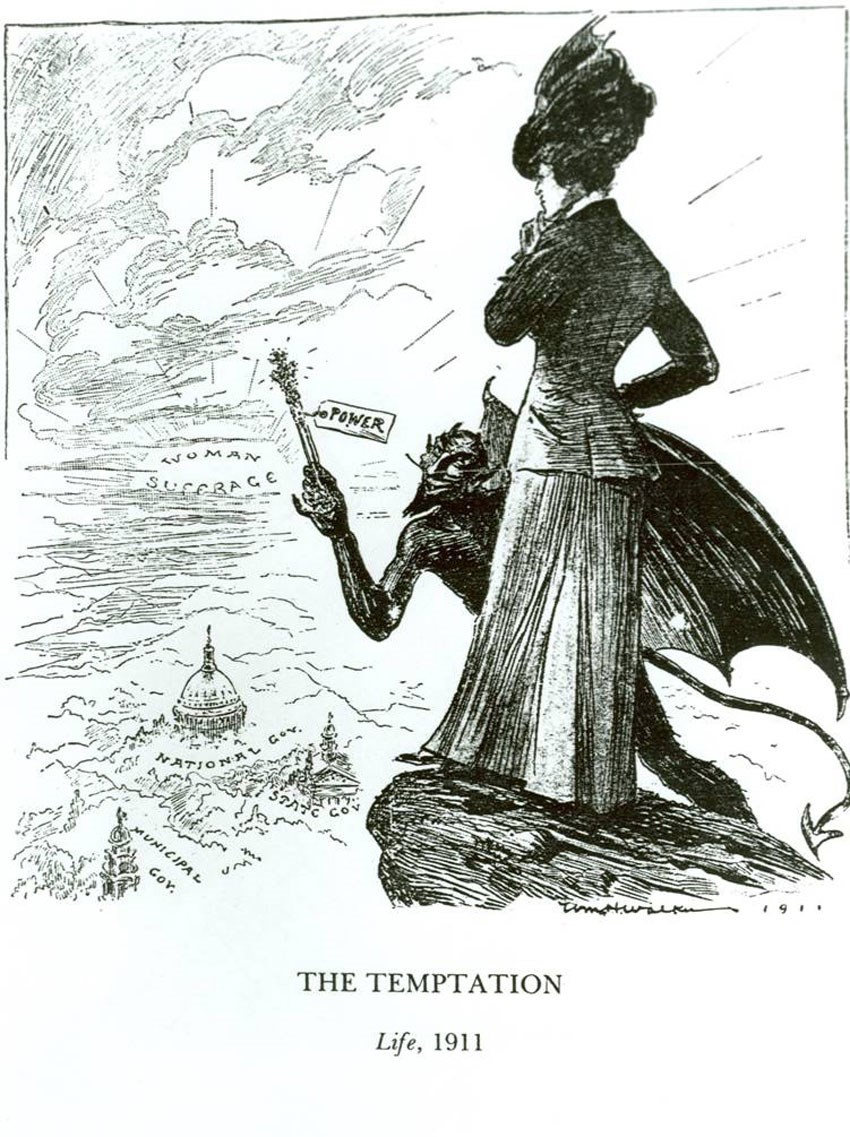 Anthony stood in the courthouse and refused to pay a fine for voting, arguing:

"Yes, but laws made by men, under a government of men, interpreted by men and for the benefit of men. The only chance women have for justice in this country is to violate the law, as I have done, and as I shall continue to do… So shall we trample all unjust laws under foot. I do not ask the clemency of the court. I came into it to get justice, having failed in this, I demand the full rigors of the law."

A caricature of Susan B. Anthony on the front page of the New York Daily Graphic. It appeared a few days before her trial for voting, and it accompanied a story about the upcoming trial. 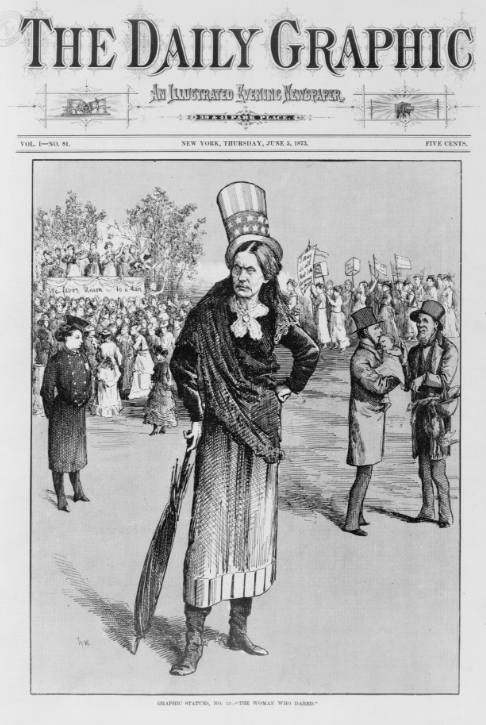 "Watkins Harper remained subject to racism, making her refusal to abandon predominantly white organizations all the more admirable. In 1869, Susan B. Anthony and Elizabeth Cady Stanton effectively left the American Equal Rights Association because it was supporting the Fifteenth Amendment, which would institute black male suffrage before white women won the vote. Refusing to follow Anthony and Stanton, Watkins Harper noted that she could not rely on white women to prioritize the concerns of their nonwhite sisters." Koritha Mitchell

Harper famously exposed racial inequities at an 1866 suffrage convention, “You white women speak here of rights. I speak of wrongs.” 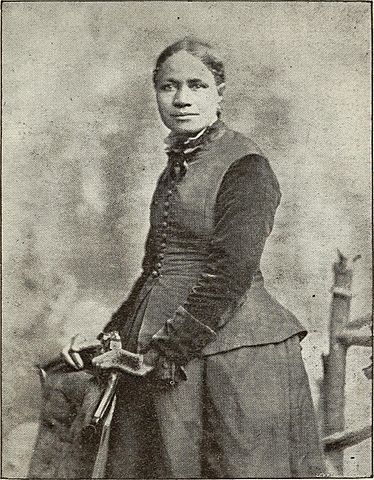 The 1913 woman suffrage procession was the first civil rights march to use the U.S. Capitol as a backdrop. It took place when the suffrage movement, in its sixth decade, needed a new approach and national attention. The parade included bands, mounted brigades, floats, an allegorical pageant, women representing many states and professions, and a contingent of male supporters.

On March 3, 1913, more than 5,000 suffragists paraded down Pennsylvania Avenue from the U.S. Capitol to the Treasury Building to demand a constitutional amendment guaranteeing women’s right to vote. Crowds of men in town for the following day’s presidential inauguration blocked the route and harassed the marchers. Public outcry over the violence led to congressional hearings. Press coverage boosted the suffrage movement, helping to bring about passage of the Nineteenth Amendment granting women the right to vote.

I asked the policeman would he not please protect this woman, and he said, “There would be nothing like this happen[ing] if you would stay at home.”

Patricia M. Street, Suffrage Parade: Report of the Committee on the District of Columbia, May 29, 1913 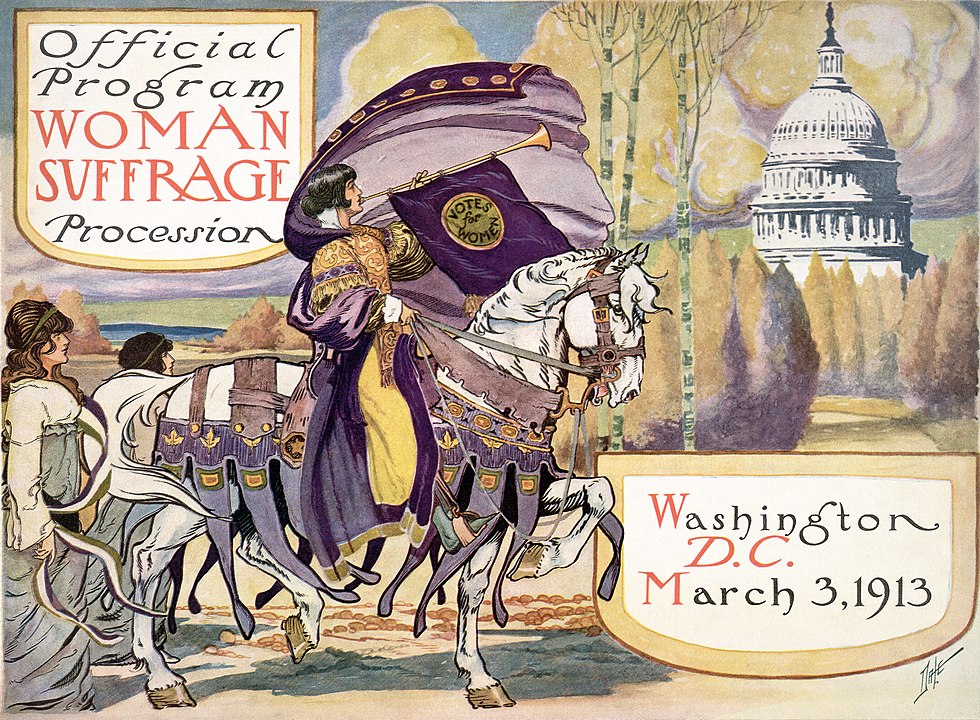 "Some marchers [in the 1913 parade] were jostled, tripped, and violently attacked, while police on the parade route did little to help.  By the end of the day, over 100 women had to be hospitalized for injuries. However, the women did not give up; they finished the parade. Their experiences led to major news stories and even congressional hearings. Historians later credited the 1913 parade for giving the suffrage movement a new wave of inspiration and purpose." 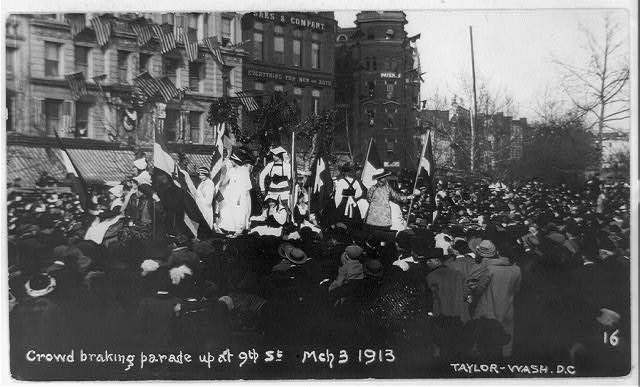 Caption label from exhibit of digital copy in Shall Not Be Denied: Women Fight for the Vote Western States Pave the Way: Suffrage Follows Lady Liberty Eastward in "The Awakening." Suffrage wins in Washington, California, and Oregon were followed by hard-fought victories in Arizona, Kansas, Nevada, and Montana. By the end of 1914, more than four million women had voting rights equal to men in eleven states, all in the West, leaving women elsewhere still reaching for the light of Liberty's torch of freedom. Henry Mayer's 1915 illustration was the centerfold of a special suffrage issue of Puck magazine, guest-edited by New York state suffrage groups.

Printed below the cartoon is a poem by Alice Duer Miller:

Look forward, women, always; utterly cast away
The memory of hate and struggle and bitterness;
Bonds may endure for a night, but freedom comes with the day
And the free must remember nothing less.
Forget the strife; remember those who strove–
The first defeated women, gallant and few,
Who gave us hope, as a mother gives us love,
Forget them not, and this remember, too;
How at the later call to come forth and unite,
Women untaught, uncoursetted, alone and apart,
Rank upon rank came forth in unguessed might,
Each one answering the call of her own wise heart.
They came from toll and want, from leisure and ease,
Those who knew only life, and learned women of fame,
Girls and the mothers of girls, and the mothers of these,
No one knew whence or how, but they came, they came.
The faces of some were stern, and some were gay,
And some were pale with the terror of unreal dangers;
But their hearts knew this :  that hereafter come what may,
Women to women would never again be strangers. 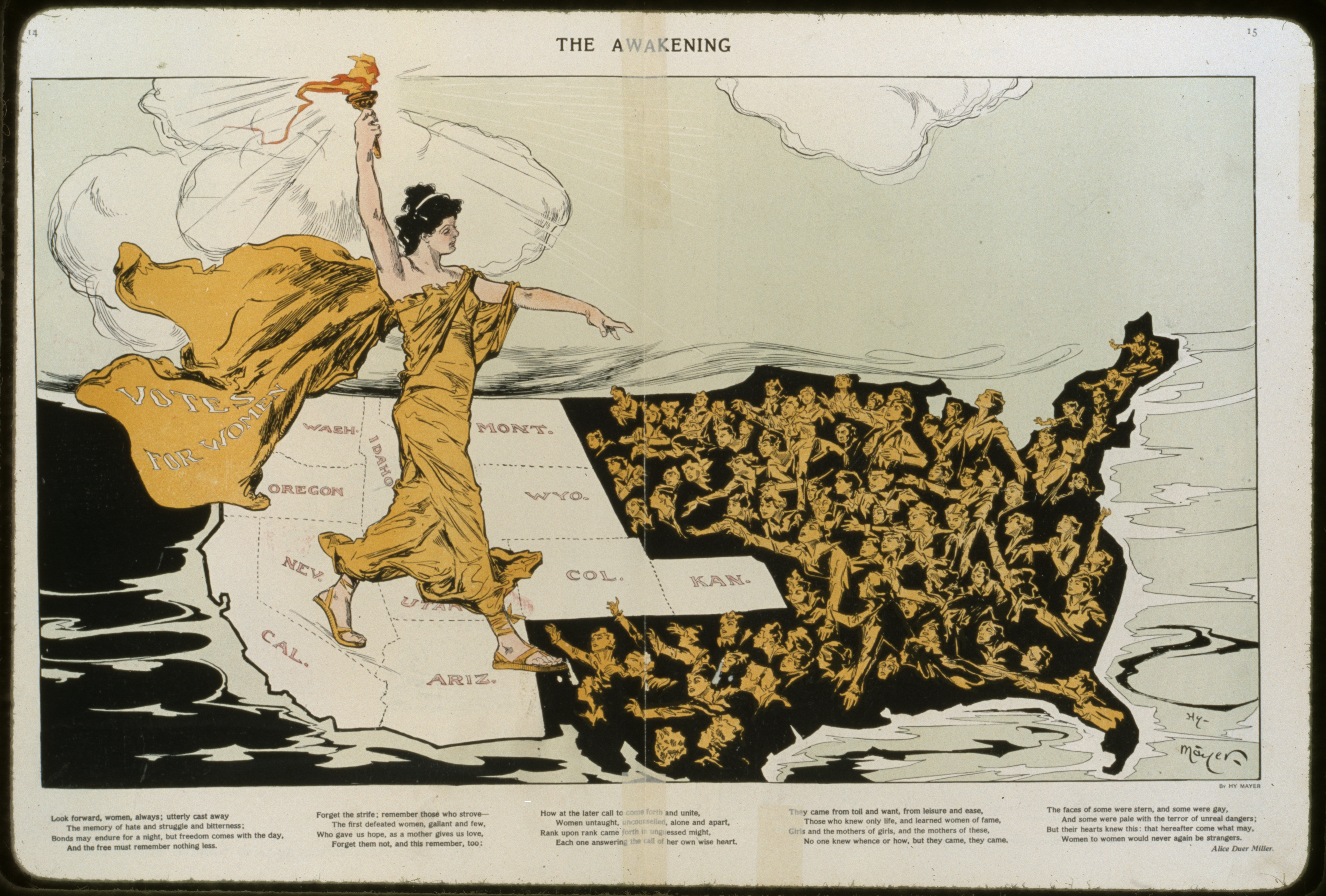 After the 19th Amendment was ratified on Aug. 18, 1920, and celebrated by millions of women across the country, the Indigenous suffragist Gertrude Simmons Bonnin, also known as Zitkala-Sa, a citizen of the Yankton Sioux Tribe, reminded newly enfranchised white women that the fight was far from over. “The Indian woman rejoices with you,” she proclaimed to members of Alice Paul’s National Woman’s Party, but she urged them to remember their Native sisters, many of whom lacked the right to vote. Not only that, she explained, many were not United States citizens, but legally wards of the government, without a political voice to address the many problems facing their communities. 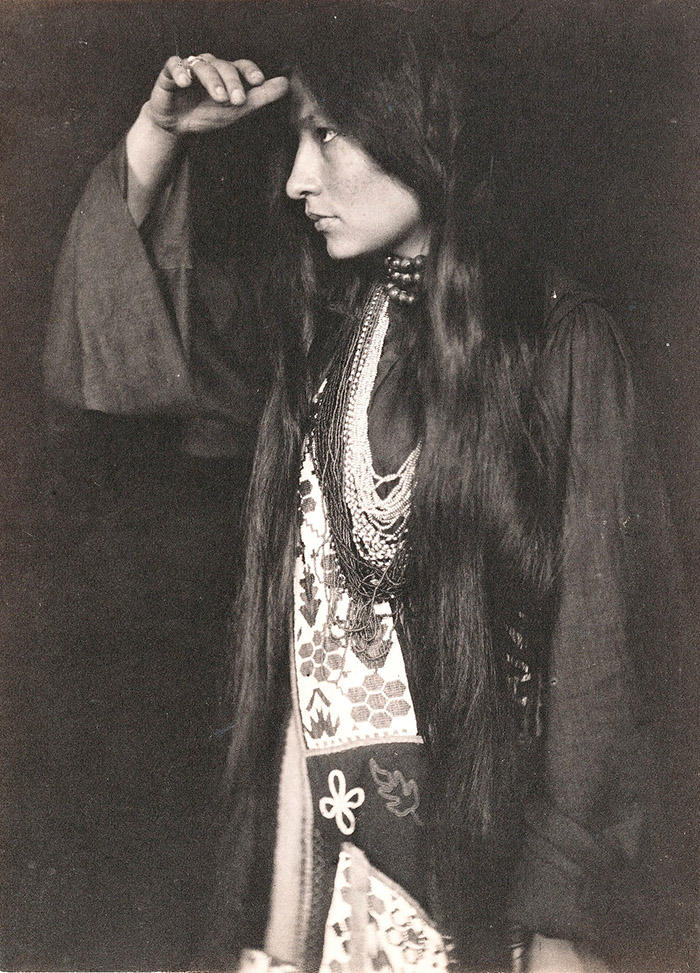 Alice Stokes Paul (1885–1977) was founder and chair of the Congressional Union, later the National Woman’s Party. Frustrated by the conservative approach of the National American Woman Suffrage Association, in 1913 Paul formed the Congressional Union for Woman Suffrage, which became the National Woman’s Party. The NWP demonstrated and agitated for woman suffrage. Paul began her agitation in Philadelphia. In 1917, Paul was arrested for picketing outside the White House and jailed at Occoquan Workhouse in Virginia, where she led a hunger strike and was force fed. In 1923, Paul authored the “Lucretia Mott Amendment,” which became known as the Equal Rights Amendment. 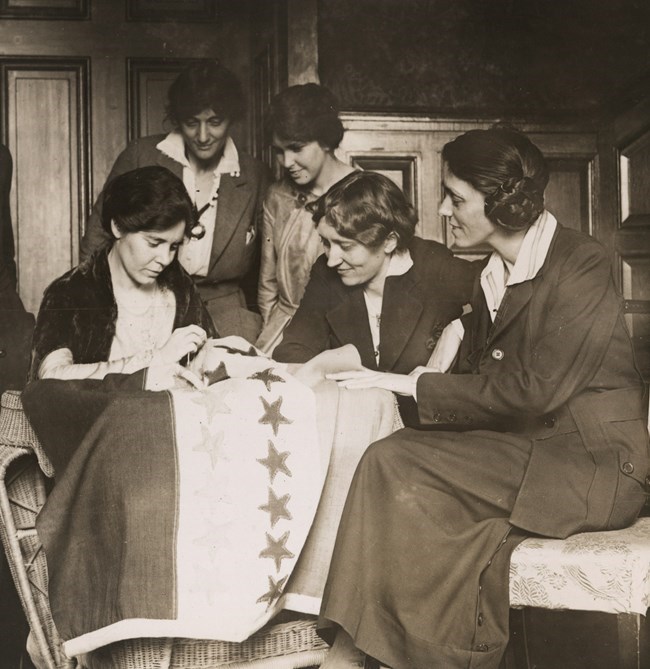 Full caption reads as follows: Bastille Day spells prison for sixteen suffragettes who picketed the White House. Miss Julia Hurlbut of Morristown, New Jersey, leading the sixteen members of the National Womans Party who participated in the picketing demonstration in front of the White House, Washington, District of Columbia, July 14,1917, which led to their arrest. These sixteen women were sent to the workhouse at Occoquan, on July 17, 1917, upon their refusal to pay fines of $25 each, but were pardoned on July 19, 1917. 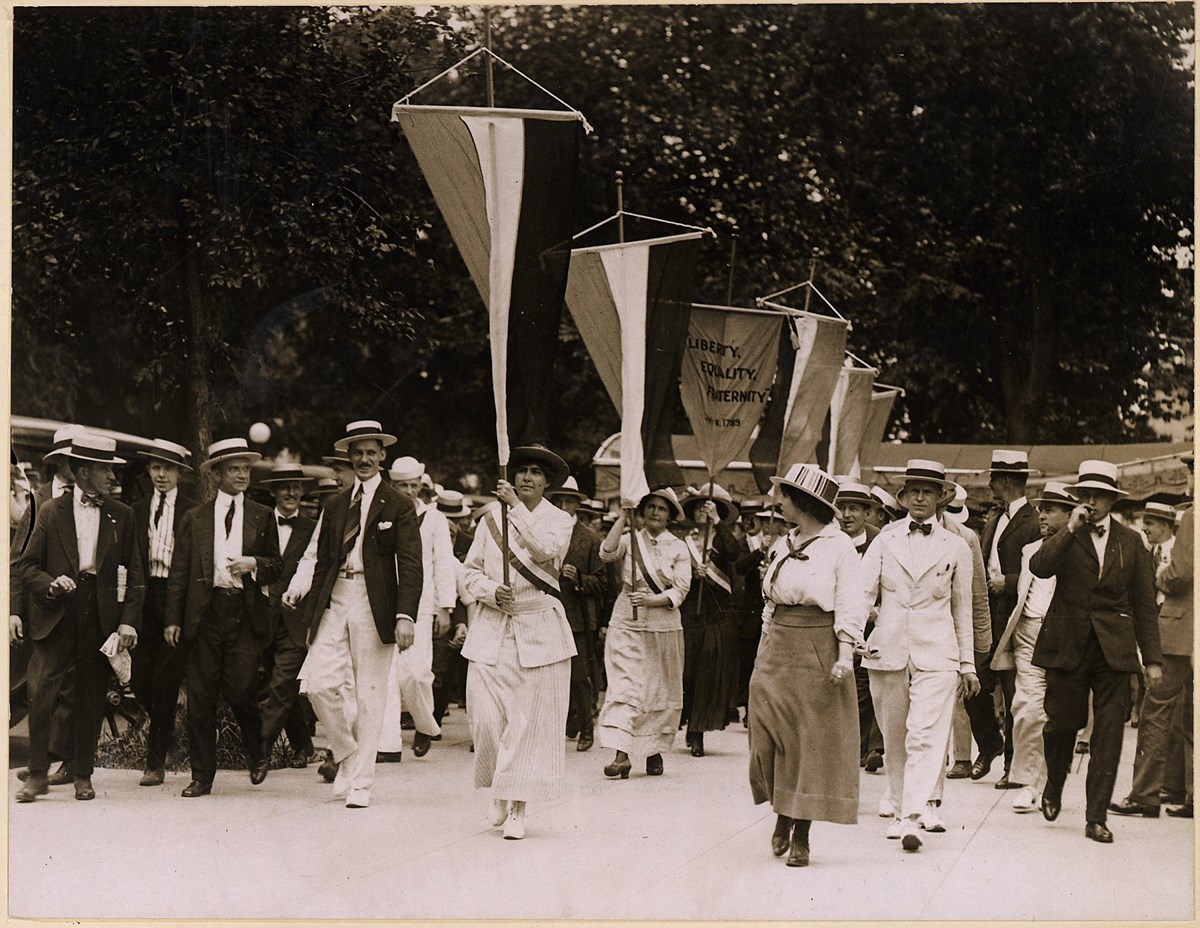 Harris and Ewing, photographer, 1918, Women of Protest: Photographs from the Records of the National Woman’s Party, Manuscript Division, Library of Congress.

"The National Women's Party (NWP) was one of the first organizations to use Lafayette Park as a stage for carrying their protests about government policies to the president. These protests asserted the women’s rights under the First Amendment to the U.S. Constitution and paved the way for thousands of citizens and others to present their causes to the President on his own doorstep...The woman in the center of the image. Her name is Lucy Branham and she is holding a torch in her right hand. The charred piece of paper in her left hand is a speech by President Wilson. Lucy Branham called the burning a 'symbolic act.'" The women wanted action from the president, not just words. https://www.nps.gov/articles/lafayette-park-first-amendment-rights-on-the-president-s-doorstep-teaching-with-historic-places.htm 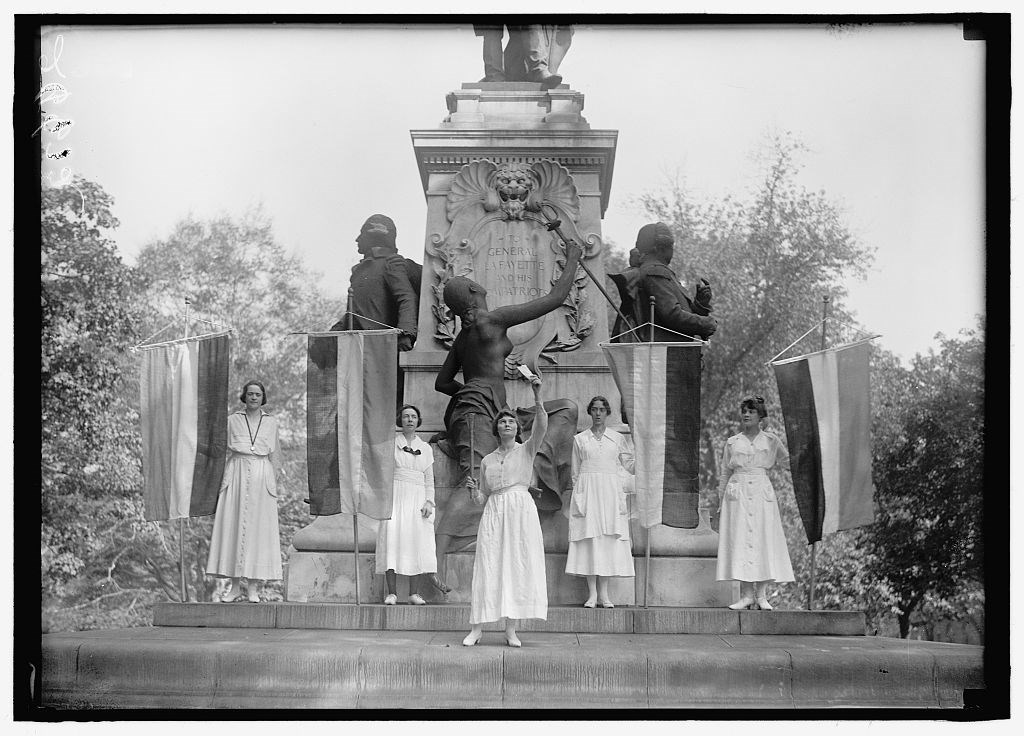 At the height of the women’s suffrage movement, Native American women were more inclined to focus on group rights, according to Gonzales. But that did not hinder intellectuals such as Laura Cornelius Kellogg and Marie Louise Baldwin from publicly supporting the women’s movement as well.

"'A number of Native American women came from societies where women were not marginalized as were women in the mainstream,' says K. Tsianina Lomawaima, a professor of justice and social inquiry in the School of Social Transformation and the Center for Indian Education [at Arizona State University]. So, to many like Cornelius Kellogg, a member of the matrilineal Oneida Nation, the mainstream women’s movement was looked upon with some amazement. Women’s rights and responsibilities, according to Lomawaima, were not new ideas for many Native American women.  https://global.asu.edu/nevertheless-she-persisted

The Washington Herald published an interview with Kellogg where she supported women's suffrage, emphasizing Iroquois women's equality of civic powers with the men. Female leaders among the Oneida were not uncommon. "It is a cause of astonishment to us that you white women are only now, in this twentieth century, claiming what has been the Indian woman's privilege as far back as history traces." https://en.wikipedia.org/wiki/Laura_Cornelius_Kellogg#cite_note-Cristina_Stanciu,_P._108-23 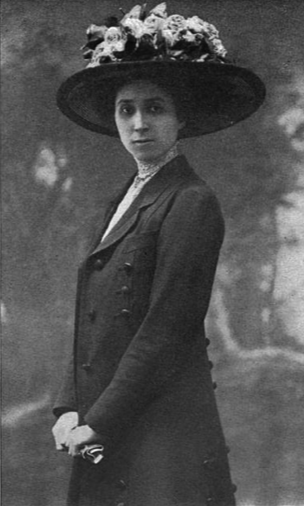