Miriam Schapiro (1923-2015) was a painter, a printmaker, an educator, and a feminist. Miriam was born in 1923, and knew from a young age that she wanted to be an artist. She was trained early on by her father, Theo, who was also an artist. From 1944-1949 she attended the University of Iowa, where she obtained her BFA, her MA, and her MFA. This was at a time where few art schools across the country were admitting women outside of art education majors. While at Iowa she met and married her husband, the artist Paul Brach. 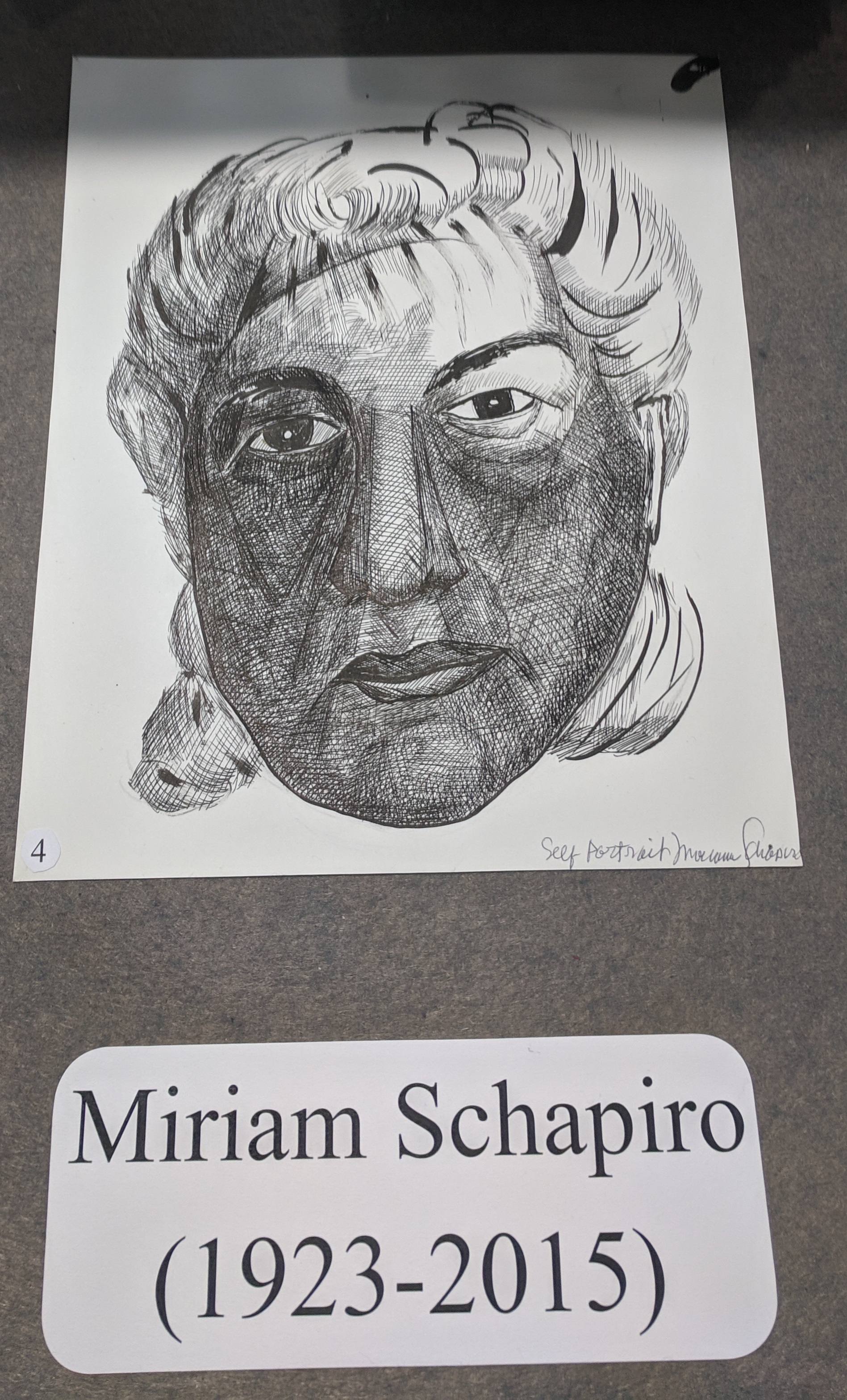 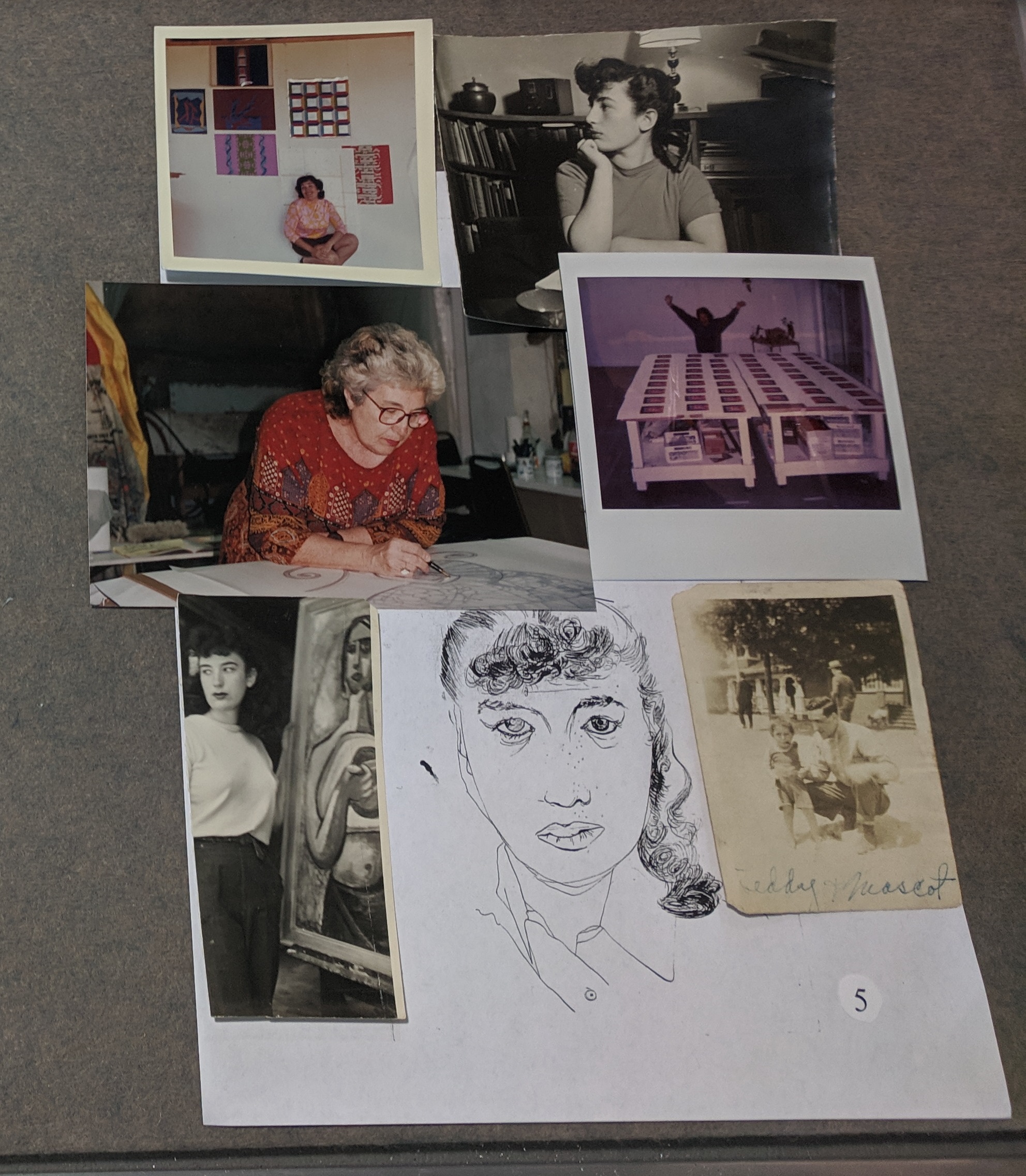 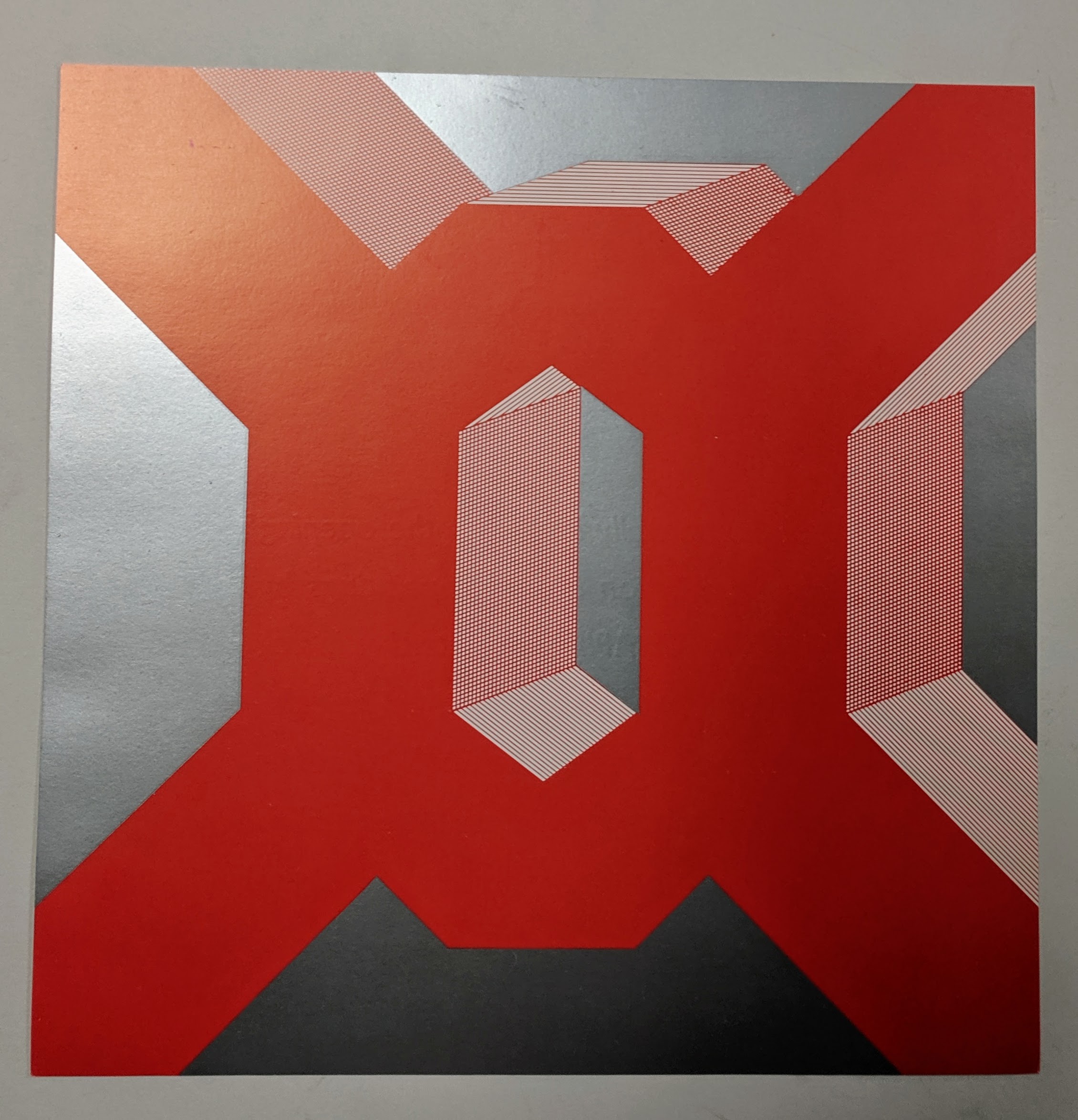 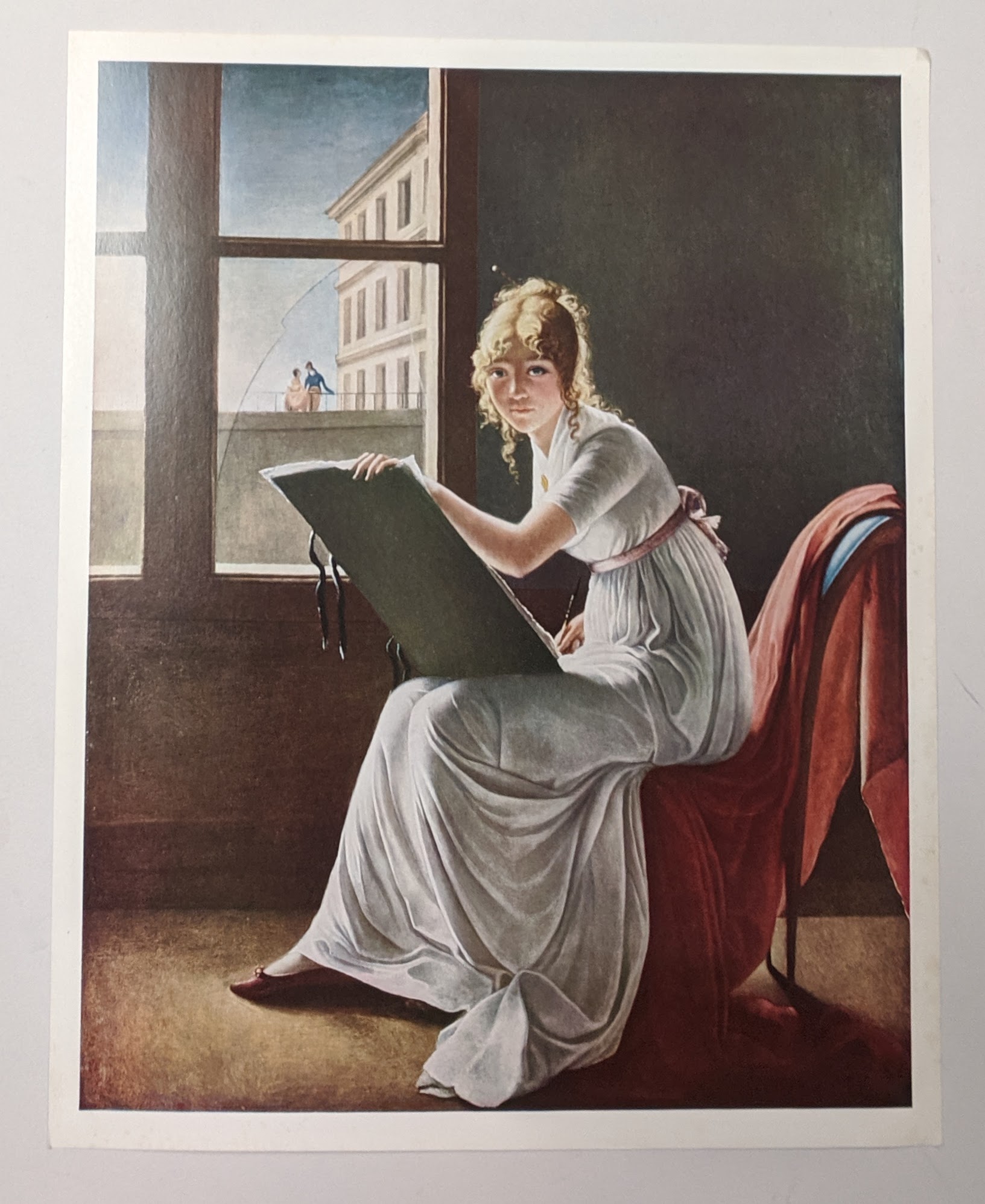 Marie Denise Villers, Marie Josephine Charlotte du Val d’Ognes, 1801. Reproduction of the painting. This painting is in the collection of the Metropolitan Museum of Art in New York. It was first attributed to Jacques Louis David, and represented to Miriam the many women throughout history whose names and works have been forgotten and the powerful testimony of those who search for them and remember them. 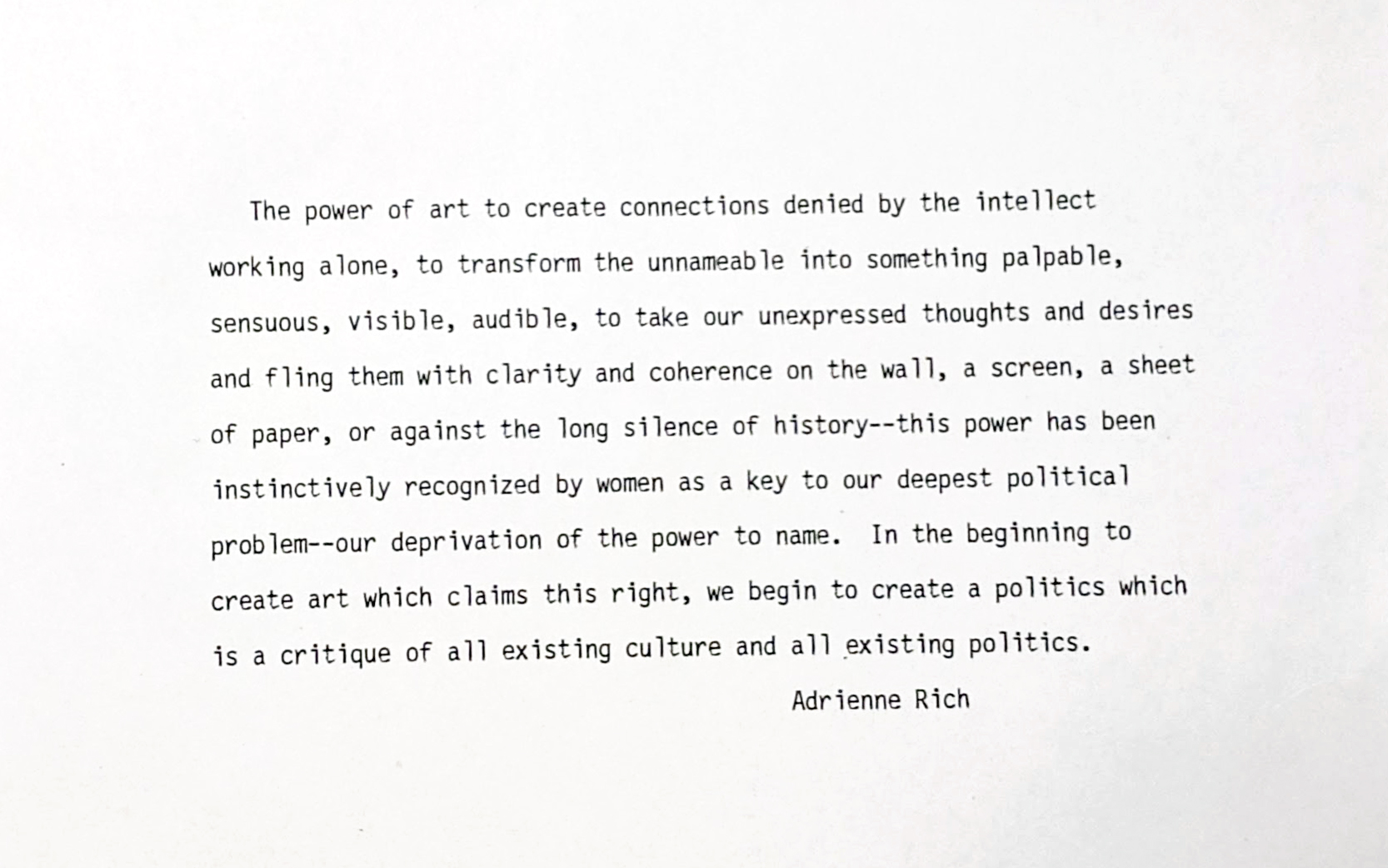 “The Power of Art”

Quote by Adrienne Rich, “The Power of Art,” photocopy.

In the late 1960s Miriam read The Golden Notebook, The Second Sex, and participated in consciousness raising sessions which connected her to other women. Issues that she felt were personal: supporting her husband, hiding the personal narrative content in her artwork, and experiencing sexism in the art world became larger issues when voiced by others in the sessions. Her feminism greatly impacted her artistic practice in the sense that she wanted to express herself as a woman artist: naming herself, her struggle and her experiences.

Jigsaw, collage on board. Computer Art, circa 1969. Miriam was one of the first artists to use a computer to create artwork. This piece, in a larger format is currently on display at the Whitney Museum.

Notebooks, various. In the Miriam Schapiro papers, there are over 225 notebooks/diaries/sketchbooks that document her thought process, the emotional/physical labor of being a wife and mother, her artistic career, and her other interests. 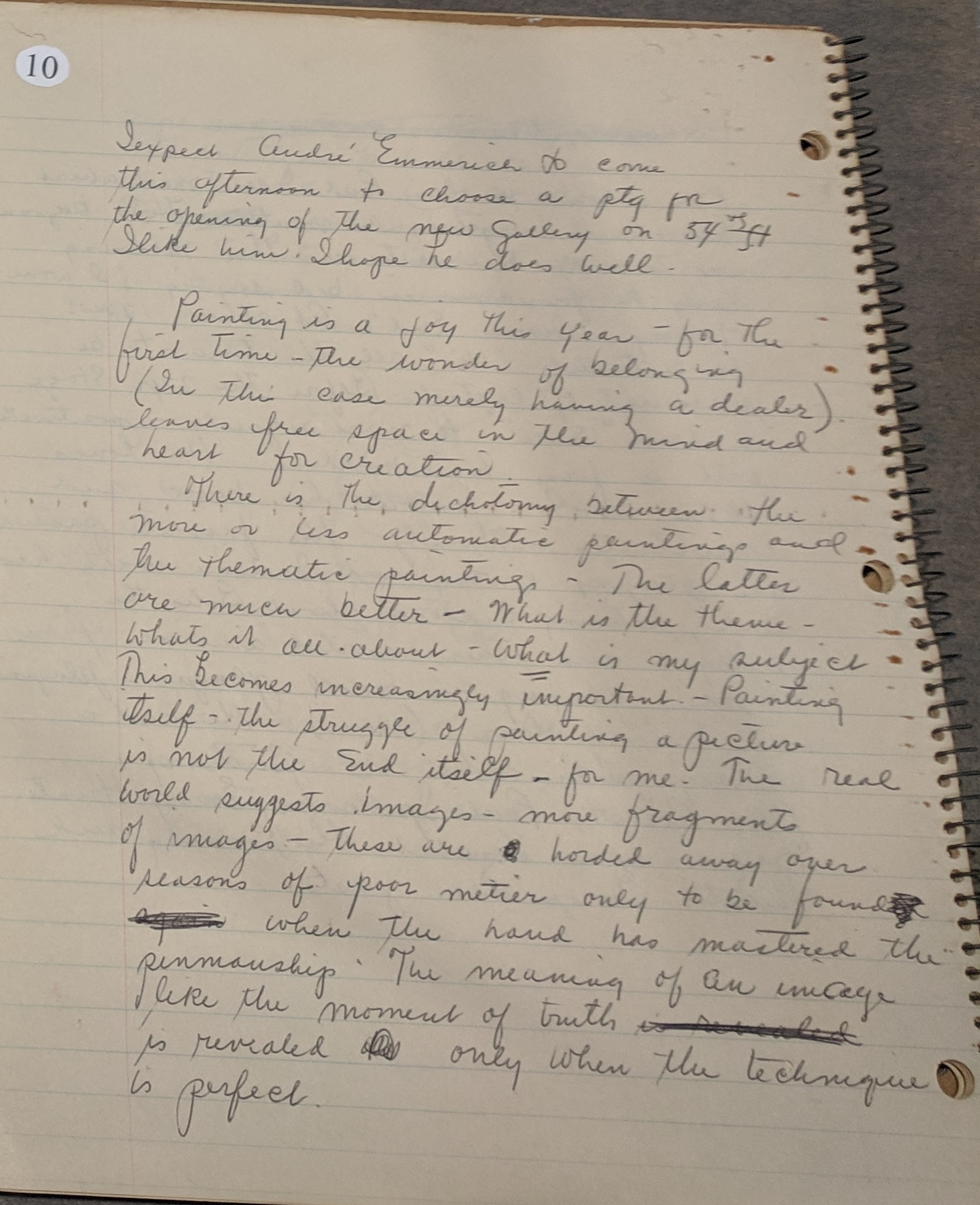 On this page Miriam discusses Andre Emmerich coming to pick out a painting for an exhibition. Emmerich was the owner of the first professional gallery she was represented by. Miriam also discusses how painting has gotten easier for her. During the 1950s Miriam struggled in the studio to find her voice. Who was she as an artist? How could she make work that represented herself, but also was sellable in a gallery? 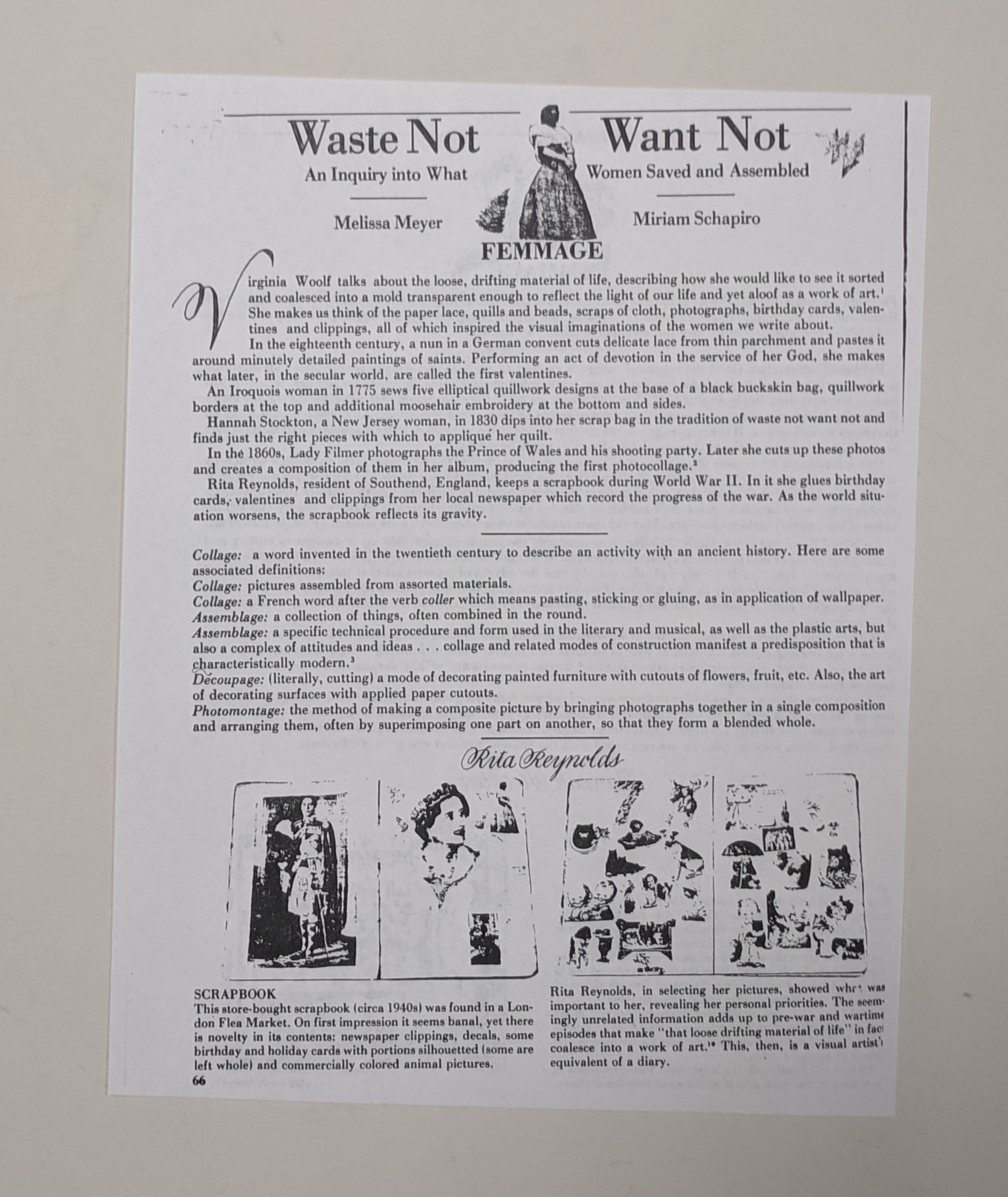 “Waste Not Want Not”, with Melissa Meyer.

“Waste Not Want Not”, with Melissa Meyer. Originally published in Heresies Magazine, Issue 4, 1977. This was Miriam’s manifesto on women’s culture, collecting, and craft. Femmage is a combination of traditional women’s activities/techniques like sewing, piecing, hooking, cutting, appliqueing.

Like in her manifesto in Case 1, “Waste Not Want Not,” Miriam saved and collected various things that informed her artistic practice and her life. This collecting included: articles on various subject matter, second wave feminist resources, fabric, information on women artists, images of people, slides of others’ artwork, and hundreds of magazine clippings. She essentially created her own vertical file of women artists.

The Feminist Art Journal, Winter 1973 and Women’s History Library, circa 1975.

Anonymous was a Woman 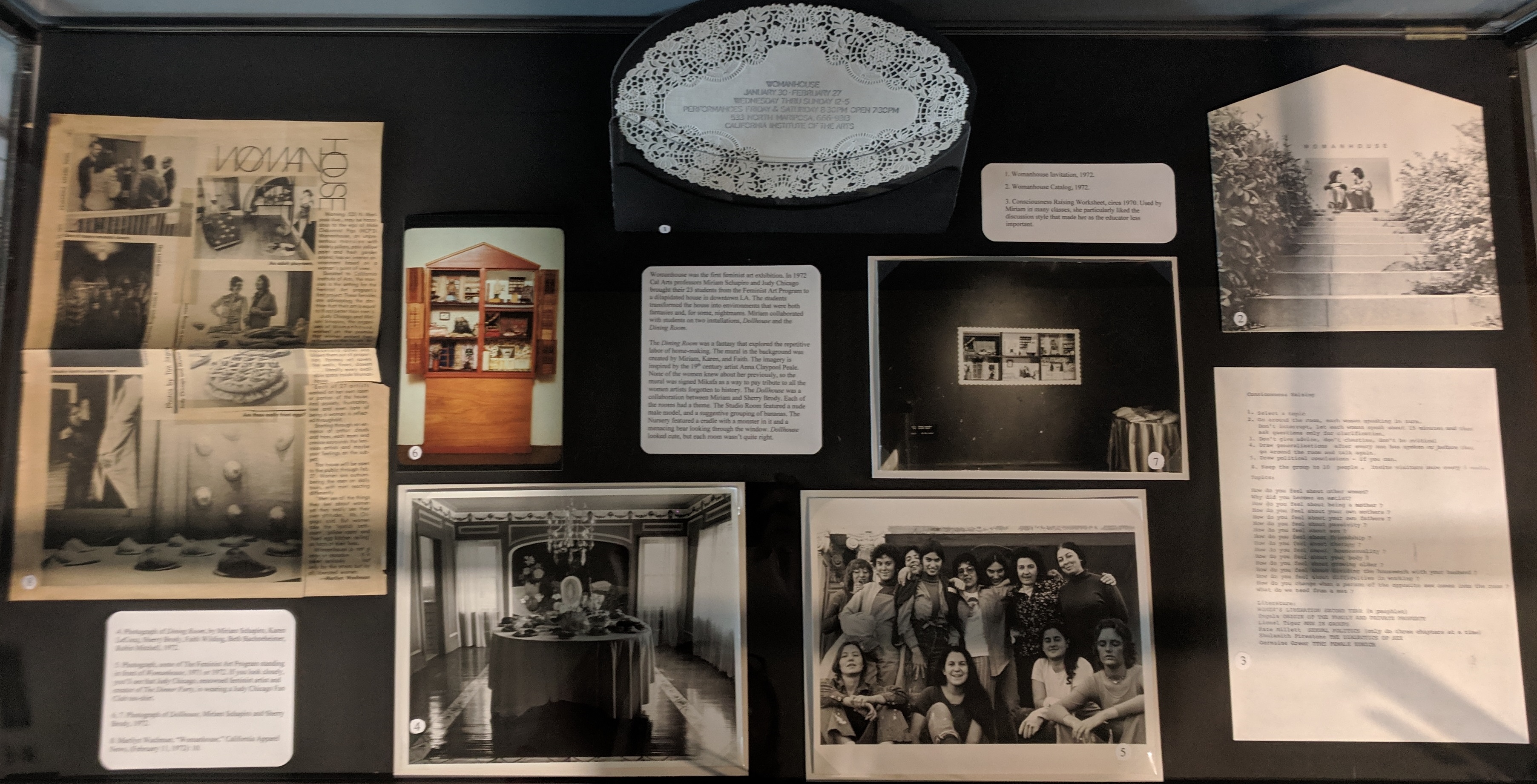 Womanhouse was the first feminist art exhibition. In 1972 Cal Arts professors Miriam Schapiro and Judy Chicago brought their 23 students from the Feminist Art Program to a dilapidated house in downtown LA. The students transformed the house into environments that were both fantasies and, for some, nightmares. Miriam collaborated with students on two installations, Dollhouse and the Dining Room.

The Dining Room was a fantasy that explored the repetitive labor of home-making. The mural in the background was created by Miriam, Karen, and Faith. The imagery is inspired by the 19th century artist Anna Claypool Peale. None of the women knew about her previously, so the mural was signed Mikafa as a way to pay tribute to all the women artists forgotten to history. The Dollhouse was a collaboration between Miriam and Sherry Brody. Each of the rooms had a theme. The Studio Room featured a nude male model, and a suggestive grouping of bananas. The Nursery featured a cradle with a monster in it and a menacing bear looking through the window. Dollhouse looked cute, but each room wasn’t quite right.

Photograph, some of The Feminist Art Program standing in front of Womanhouse, 1971 or 1972

Photograph, some of The Feminist Art Program standing in front of Womanhouse, 1971 or 1972. If you look closely, you’ll see that Judy Chicago, renowned feminist artist and creator of The Dinner Party, is wearing a Judy Chicago Fan Club tee-shirt.

Consciousness Raising Worksheet, circa 1970. Used by Miriam in many classes, she particularly liked the discussion style that made her as the educator less important.

The Decorative: Miriam specifically loved the decorative, the frivolous, and the feminine. Her politics as a feminist informed her aesthetic choices since women’s culture is often devalued as craft or hobby. Miriam collected decorative objects and used them in her artwork in order to highlight their value and to align herself with the history women artists who came before her. In the 1980s when the art world was turning towards conceptualism, Miriam doubled down: on top of fabric she added glitter and shaped her canvases like fans and hearts. A critic called Miriam’s style “aggressively decorative.” 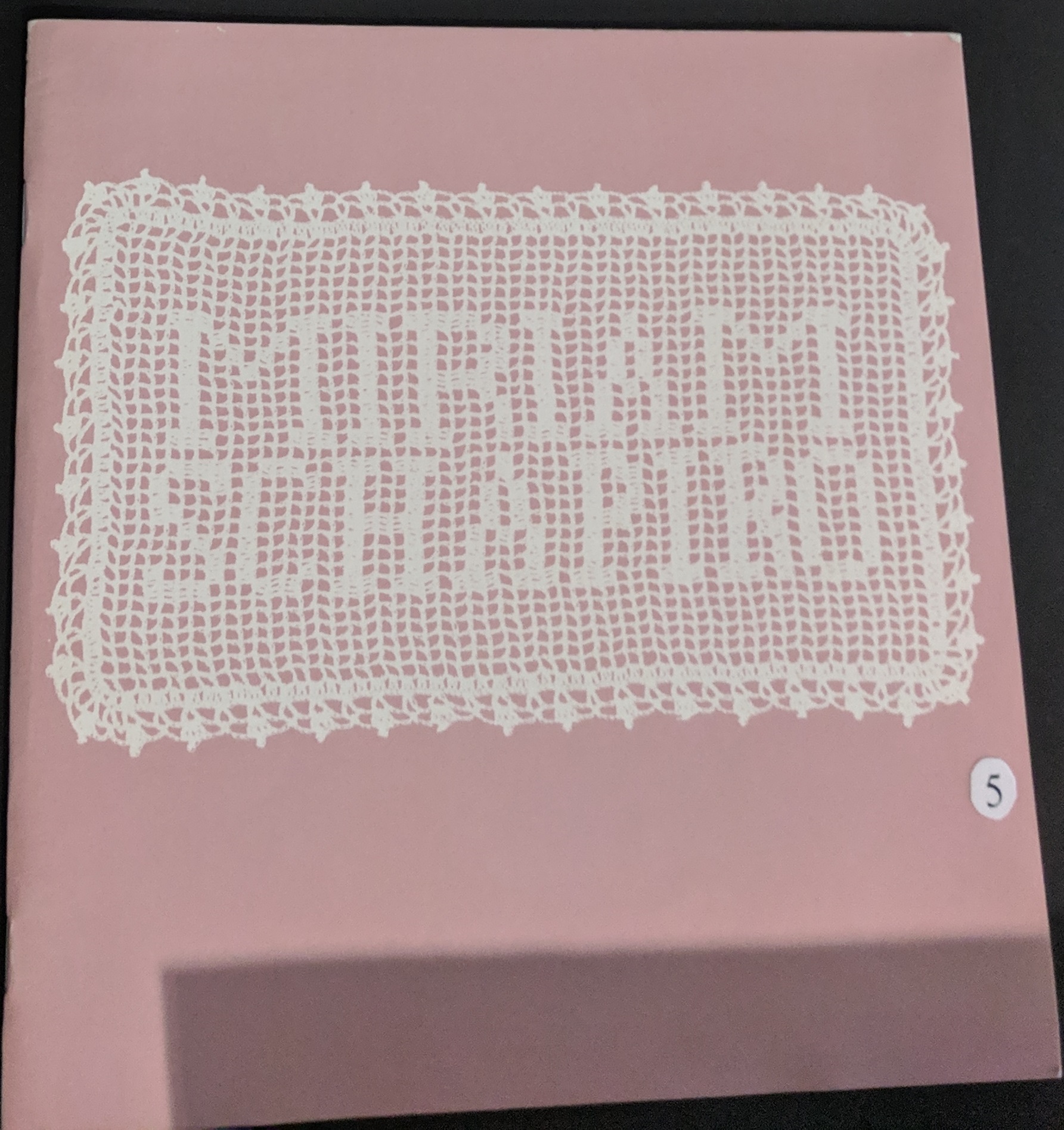 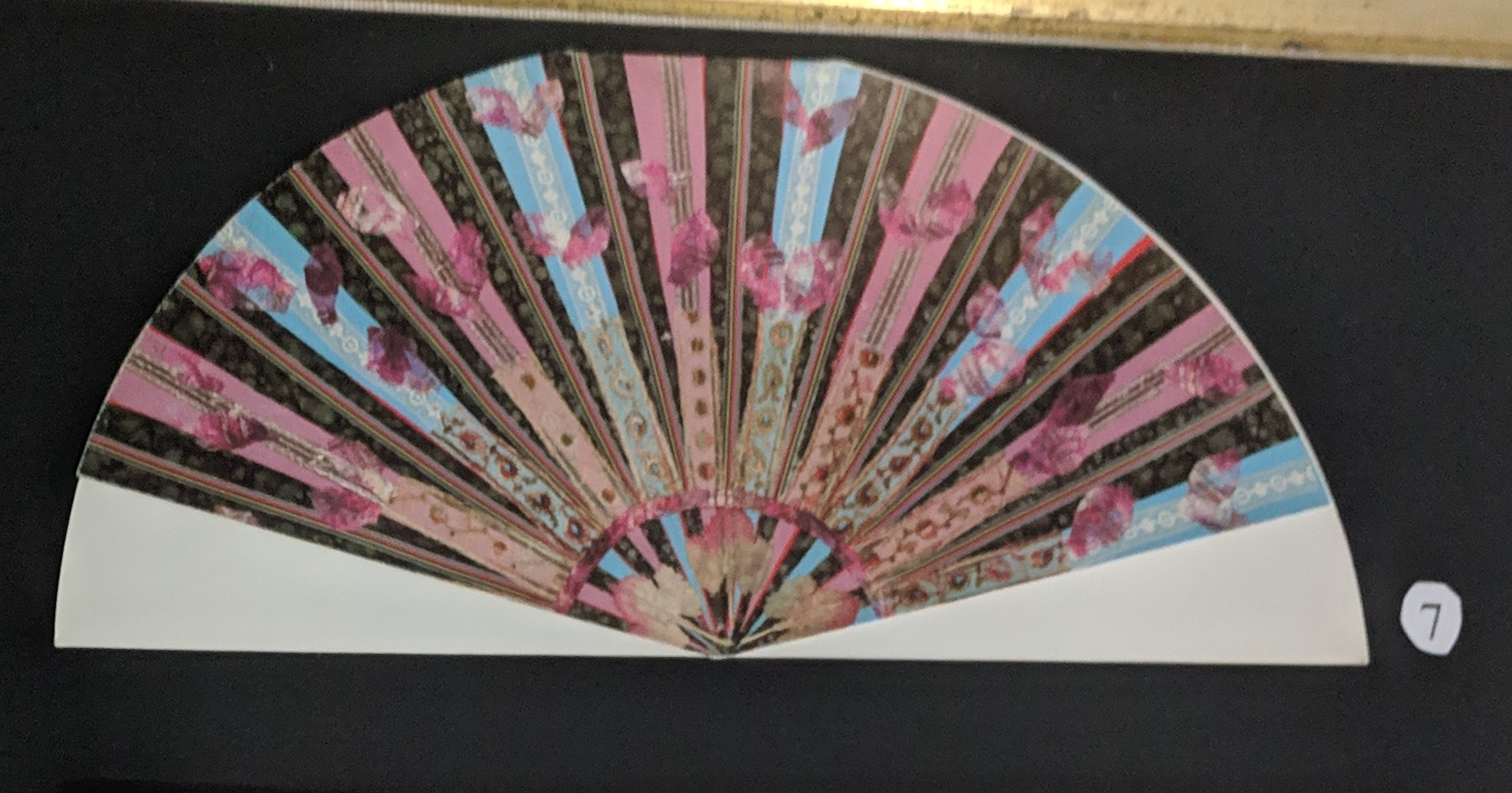 Handkerchief, given to Miriam, undated.

Paper and Fabric Doll, preparatory artwork. A similar doll figure can be seen in the artwork Le Jardinier.

Miriam Schapiro, On the Decorative, 1978. 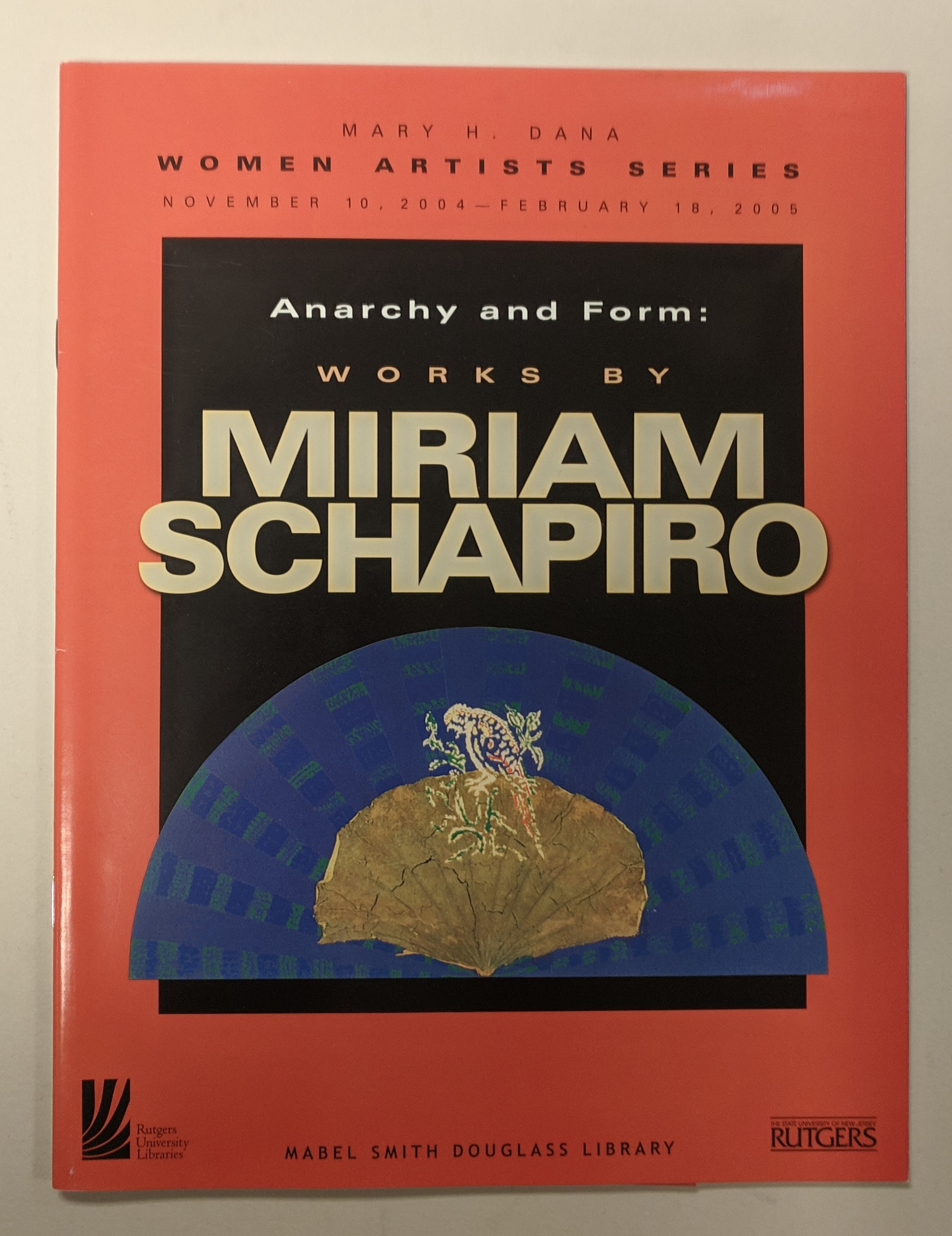 Catalog of the exhibition held at Mabel Smith Douglass Library, Rutgers University, November 10, 2004-February 18, 2005. Record of a conversation between Miriam Schapiro and Ferris Olin (held August 11, 2004) forms the basis for the catalog text.

Copies can be found: http://bit.ly/2JmapEG 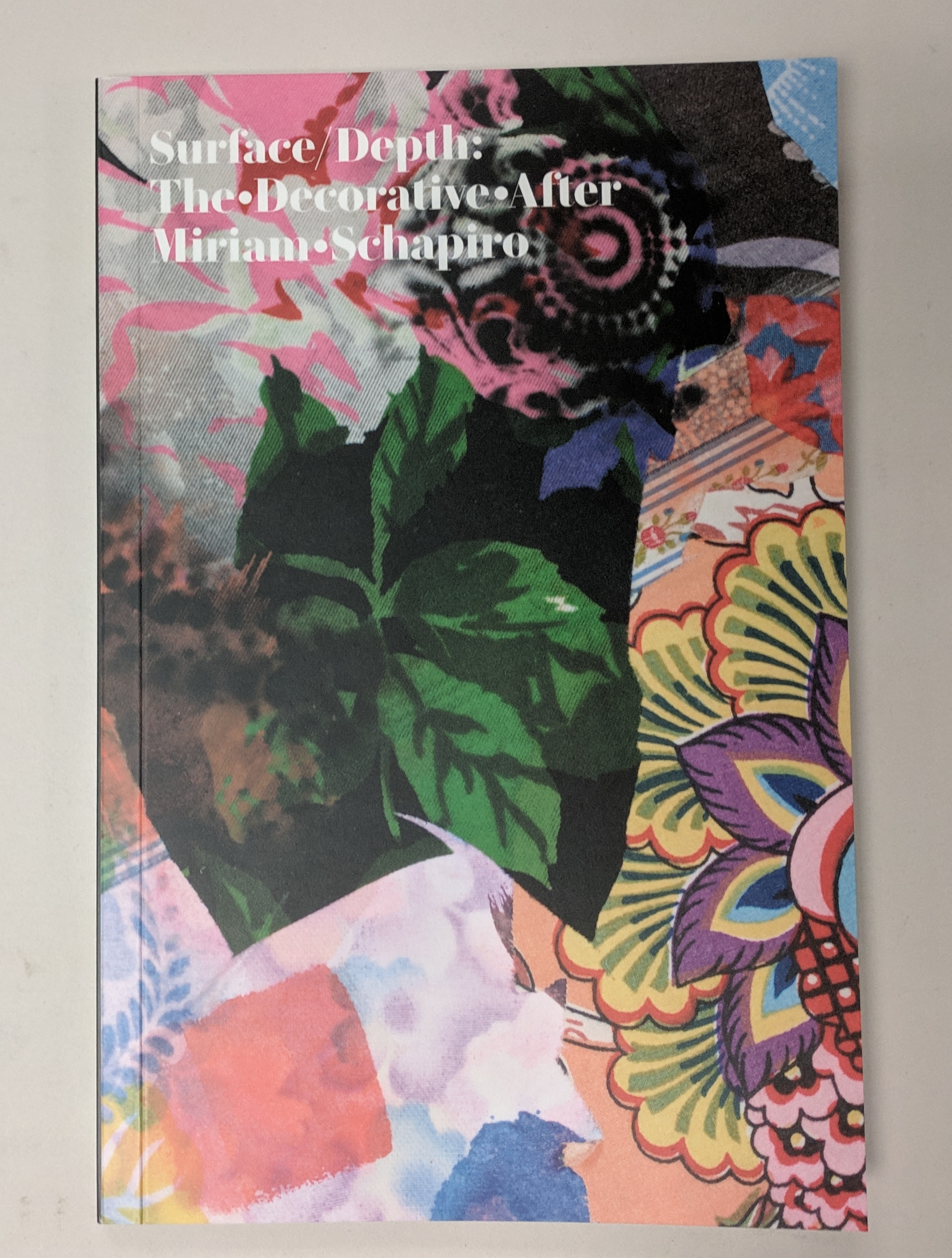 Catalog of an exhibition held at the Museum of Arts and Design from March 22 to September 9, 2018 and curated by Elissa Auther. 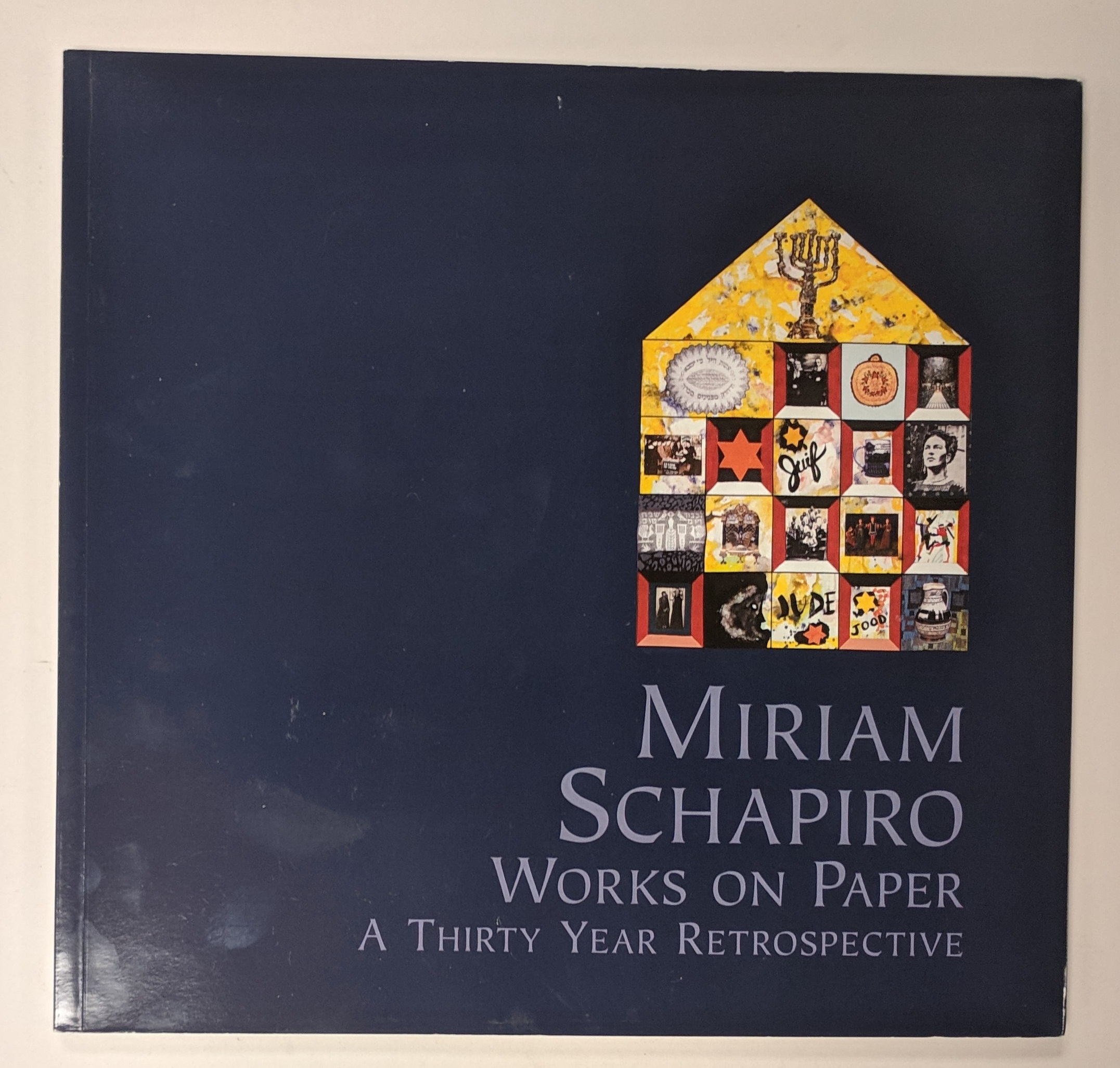 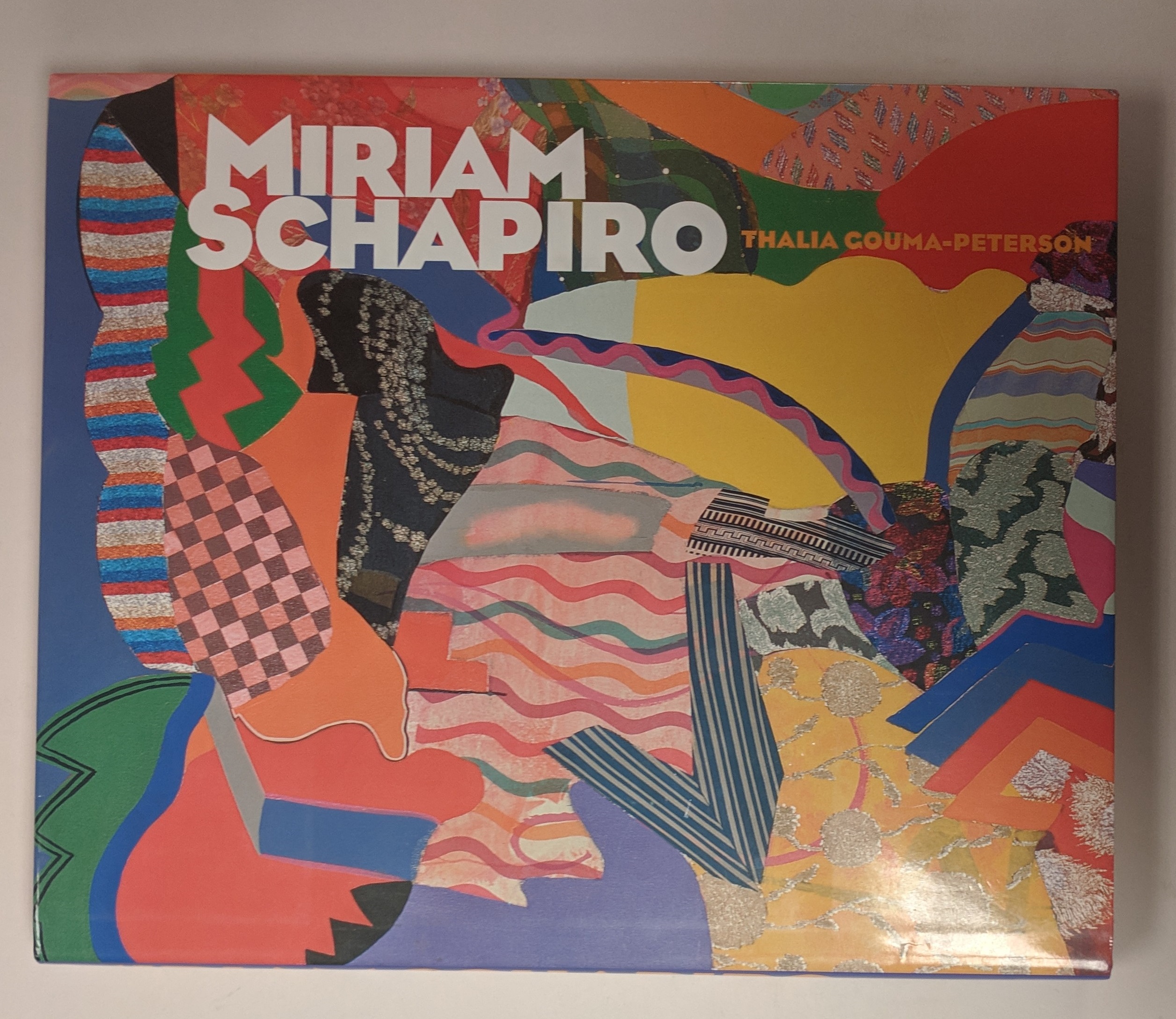 Miriam Schapiro : shaping the fragments of art and life

Copies of this book can be found: http://bit.ly/2Q5YbRR