Mary Lou Williams with Andy Kirk and His Clous of Joy, Late 1930s 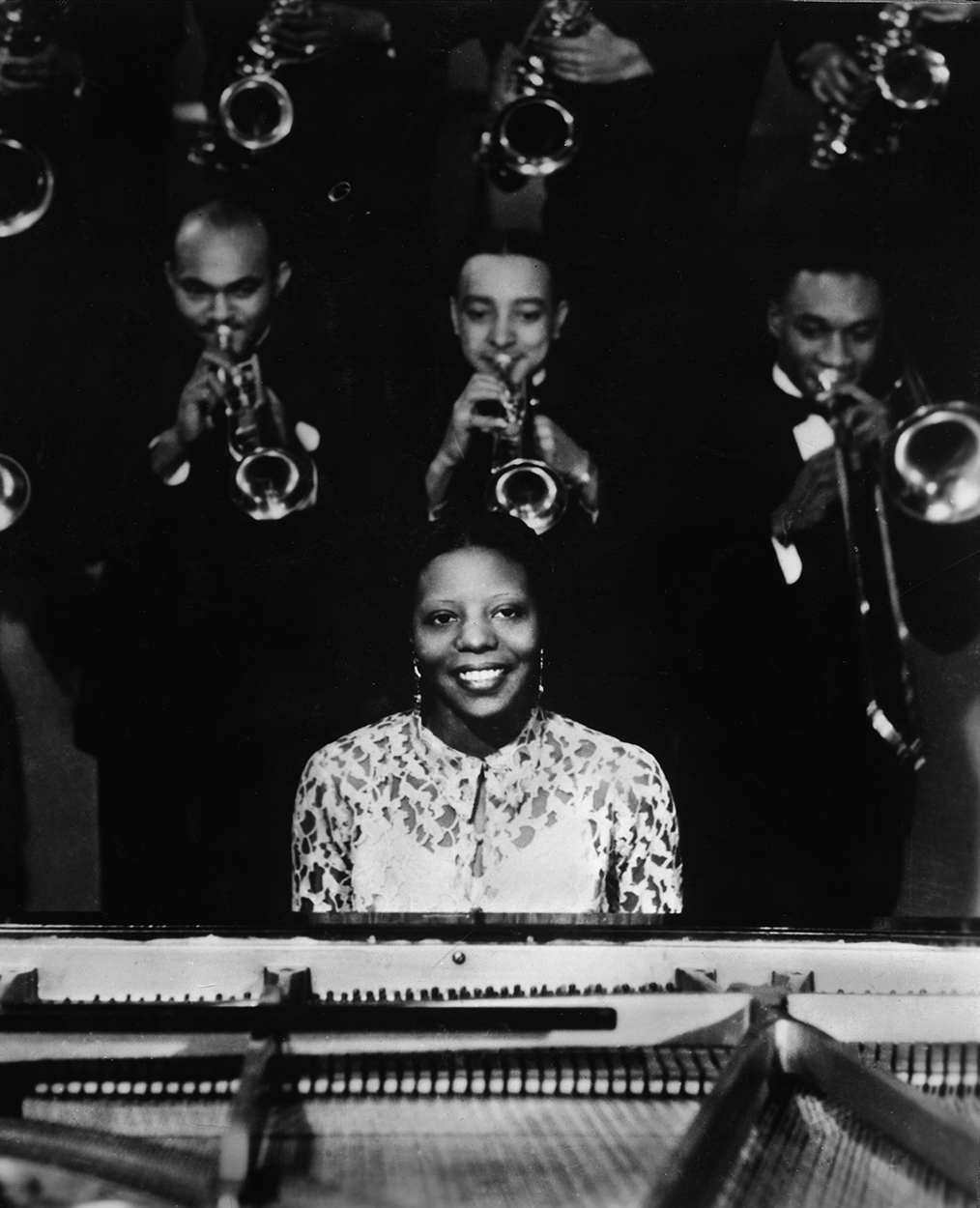 A Career That Covered All Eras of Jazz

No musician traveled across more musical borders in jazz than pianist/composer/arranger Mary Lou Williams in her 57 years as a performer. The sweep of her music include blues, ragtime, stride, boogie-woogie, swing, modern jazz known as be-bop, suites, liturgical music including three Masses and several choral works. She was also steeped in jazz history (as well as being a part of it), and in later years was an exacting and respected educator. Identifying Williams as being among the earliest and finest female jazz artists in jazz muddies the waters of her accomplishments and the respect she was held among the tough crowd of fellow musicians who praised her as a perpetual modernist who never stopped searching.

Mary Alfreida Scruggs was born in Atlanta’s dirt-poor Edgewood neighborhood on May 8, 1910, and grew up in Pittsburgh. She was a child prodigy, who played a small pipe organ and reproducing melodies by ear by age four and began helping support her family from around 13. At 15, in 1925, she began touring professionally with African American vaudeville revues when she met saxophonist John Williams. They married the following year. Her first recordings, in 1927, were made with Jeanette James’s Synco Jazzers and John Williams’s Synco Jazzers. Her relationship with Williams led them to the longest association of her career, the twelve years they spent with Kansas City bandleader Andy Kirk in beginning1929 in what became the Clouds of Joy.

Mary Lou Williams’s contributions to Andy Kirk and His Clouds of Joy ensured the band’s success. They included such compositions as “Messa-A-Stomp,” “Drag ‘Em,” Walkin’ and Swingin’,” “Mary’s Idea,” and “The Lady Who Swings the Band.” Also factoring in were the quality of her arrangements and her fluent and expressive piano playing. Her influence meant that the Kirk band had a more restrained sound than its swing era Kansas City contemporary, the Count Basie Orchestra, but was as deeply rooted in the blues, always a key element of Williams’s music. She also found time to do work for such leading bandleaders as Louis Armstrong, Benny Goodman, Earl “Fatha” Hines, Tommy Dorsey, and Jimmie Lunceford. By the time Williams left Kirk in 1942, she had divorced John Williams and married trumpeter and Kirk band member Harold “Shorty” Baker, who later went on to acclaim with the Duke Ellington Orchestra, with whom she traveled with for a while as a staff arranger.

This period is fascinating for her intense involvement with modern jazz pioneered by trumpeter Dizzy Gillespie and alto saxophonist Charlie Parker and others in the early 1940s. She held regular salons in her Harlem apartment to collaborate with and mentor such musicians as Gillespie, and pianists Thelonious Monk, Bud Powell and Tadd Dameron. “If we are to make progress in modern music, or if you prefer, jazz, we must be willing and able to open our minds to new ideas and developments,” she said in 1947.

She gained wide exposure during frequent appearances in the mid-1940s at Barney Josephson’s Cafe Society in New York, the first integrated jazz club in the country. Josephson helped her secure Williams her own weekly show on New York radio station WNEW, Mary Lou Williams Piano Workshop, where she introduced the twelve-part Zodiac Suite. The suite was presented at Town Hall in 1945; three parts were later performed by the New York Symphony Orchestra, a nod of respect for jazz by a leading orchestra.

By the early 1950s Williams was despondent due to her lack of recent recordings, past failures to copyright her music, uneven management, and the toll drugs and alcohol had taken on the jazz scene in the late-1940s. As a result she agreed to headline The Big Rhythm Show of 1952 for a two-week tour of Europe that turned into two years. Her transition into modern jazz met with mixed reactions in Great Britain. Fans of traditional jazz expected to hear her to sound as did during the Andy Kirk days. Others, especially those in the jazz press, were deeply moved and helped open doors to additional engagements and recordings. Living in Paris brought her into the mix with such notable American expatriates Don Byas, Sidney Bechet, Hazel Scott, writer James Baldwin, actor Canada Lee, singers Eartha Kitt and Annie Ross and jazz patron Baroness Nica de Koenigswarter.

By the time Williams returned to America in December 1954 she was engulfed by spiritual crisis and self-doubt that led her to consider abandoning music. The other outgrowth of this tumult was finding a lifelong home in the Roman Catholic Church. She was financially unable to leave music, especially nightclub music. Her spiritual adviser Fr. Anthony Woods, SJ (Society of Jesus), recommended to her by jazz historian and critic and later Catholic theologian Barry Ulanov, connected Williams to the Jesuit community in New York. Williams was encouraged, in her words, “to offer my playing up as a prayer for others.” Williams was baptized alongside Gillespie’s wife Lorraine in May 1957. Williams’s appearance with Gillespie two months later at the Newport Jazz Festival marked her reemergence in jazz and a fresh round of engagements in the United States and Canada.

She responded to her religious calling in ways both artistic and practical. In 1958 she founded the Bel Canto Foundation, which operated thrift stores in Harlem and Chelsea for ten years to raise money for drug- and alcohol-dependent musicians. Her sacred music elevated her to the rarefied company of Duke Ellington, who wrote sacred music toward the end of his career in the 1960s and 1970s. She prevailed on Fr. Woods to write lyrics for her first sacred work, Black Christ of the Andes, in 1962. It celebrated St. Martin de Porres, a seventeenth-century Dominican lay brother and the first black canonized by the Roman Catholic Church.

Williams was one of six composers featured in a February 1967 concert at Carnegie Hall, Praise the Lord in Many Voices, organized by the Jesuits’ at America magazine. That spring she returned to Pittsburgh and composed her first Mass, known as The Pittsburgh Mass, which was never commercially recorded. She composed Mass for the Lenten Season the following year. The Vatican denied her request to perform the Mass in an actual liturgy/service because Church officials objected to the use of drums in the composition, but was broadcast as a concert by Vatican Radio. Later, Williams did receive a commission from the Church to write a Mass using texts for the Votive Mass for Peace, known as Music for Peace. The great choreographer Alvin Ailey reworked elements of the music to create dances of praise he called Mary Lou’s Mass in 1971. Williams performed the work at St. Patrick’s Cathedral in New York featuring a 60-voice youth choir in 1975.

Williams returned to regular performance and recording in the early-1960s, even starting her own record label, Mary Records, to record her music and Cecelia Music (named for the patron saint of musicians) to publish her works. With appearances at the Hickory House nightclub in New York in 1964, she renewed friendships and made new ones as well—most fortuitously a young Jesuit seminarian named Peter F. O’Brien, who became more prominent in her life following the death of Fr. Woods in 1965. He went on to become her advocate, and beginning in 1971, her business and personal manager. In the 1970s, Williams hooked up again with Barney Josephson as a regular at The Cookery. At the urging of O’Brien, she accepted a teaching position at Duke University in 1977; he also co-taught her courses on jazz history. Following her death, he founded the Mary Lou Williams Foundation, to promote her music and provide money to bring jazz to young people. (The organization continues following Fr. O’Brien’s death in 2015.) An invitation to perform at the White House Salute to Jazz in 1978 was one of many tributes in the twilight of her career, which included fellowships, awards, and honorary doctorates. Until her death of cancer in Durham, North Carolina at age 71, Mary Lou Williams delivered upon the full promise of her passion, energy, soulfulness, and her exemplary musicianship in celebration of her God, and her family, friends and fans. And spreading jazz.