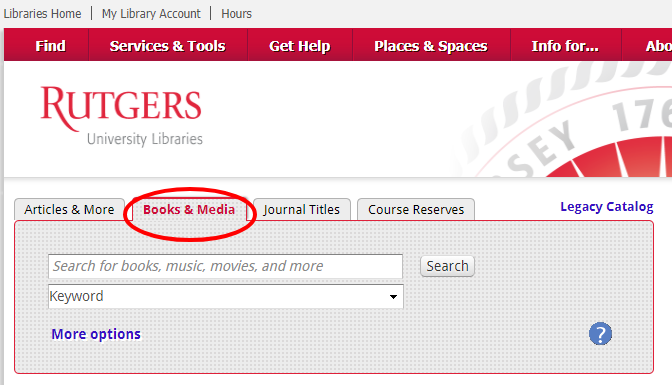 Interlibrary loan request forms are available under DELIVERY AND INTERLIBRARY LOAN on the Libraries' website. or by clicking on the [ILL] button in the Library Catalog. On the Interlibrary Loan and Article Delivery Services page, login with your NetID and password.

Encyclopedia of American Immigration [Rutgers Restricted]
"Covers the full depth and breadth of American immigration history--from the arrival of the early ancestors of Native Americans more than ten millennia ago to a broad range of twenty-first century immigration issues." Addresses the diverse demographic, economic, legal, political, and social aspects of immigration.

Encyclopedia of Puerto Rico
"Organized into 22 subject areas structured in 15 sections, which include essays and articles by academics, researchers, and subject matter experts. Each area includes a general overview and an increasing number of specialized articles of an expository and descriptive nature."

Encyclopedia of Race, Ethnicity, and Society [Rutgers Restricted]
"Describes over a hundred racial and ethnic groups, with additional thematic essays discussing broad topics that cut across group boundaries and impact society at large. Electronic version of the 3 volume print resource."

Gale Encyclopedia of Multicultural America [Rutgers Restricted]
"Contains 8,000 to 12,000 word essays on specific culture groups in the United States, emphasizing religions, holidays, customs, and languages in addition to providing information on historical background and settlement patterns. Also covers ethnoreligious groups such as Jews, Chaldeans, and Amish. Each essay lists organizations and research centers; name, address, and contact information for periodicals, radio, and television stations; and a further readings section." Electronic version of the 6 volume 2nd edition of the print resource.

These reference books are good starting place to have a general overview of certain topics related to Latino studies. Useful resources are listed by research themes that can guide your to further search. These books are on the reference shelves, 1st floor of Dana Library. You are welcome to read them in library but you won't be able to check them out,